Over 60 per cent of the production cost of a lettuce is in the manual harvesting; automating this process would allow producers to be more competitive and respond faster to demand. SoftHarvest, working closely with G’s Growers, one of the UK’s largest vegetable producers, has developed a robotic handler with vision recognition that is set to revolutionise this £300 million market across the UK, France and Spain.

SoftHarvest was selected in June 2016 as the student winner of GROW, the UK’s first national agri-tech business plan competition.

Dr Belinda Clarke, Director of Agri-Tech East, says: “There is significant and growing demand for automation in agriculture as we move towards greater precision in all areas of the industry. “Armand De Durfort produced a well researched business plan based on his direct experience of working with a commercial grower. It shows an appreciation of the narrow profit margins in this competitive market and the technology is inspirational.”

The venture started as a research project between G’s Growers and the bio-inspired robotics laboratory of the University of Cambridge. G’s was looking to purchase an automated harvesting line with a three-year payback and a 33% internal rate of return. The challenge is considerable as lettuces are very delicate and bruising can make the produce deteriorate quickly. There are also many varieties and the two most common, iceberg and romaine, are very different in shape.

Cofounder of SoftHarvest Armand De Durfort says: “The first challenge was to teach the harvester to recognise the lettuce and distinguish it from other green plants. The second was for it to pick the lettuce and cut it near to the ground without damaging it.

“Our approach is to develop the vision recognition and control software and integrate this with a two-armed robot. By using existing hardware and adding considerable value with the application-specific software we aim to mitigate the risk of investment and provide a three-year return on investment.”

Armand de Durfort is a graduate from Ecole Polytechnique and has just completed his MPhil in Industrial Systems, Manufacture and Management at the University of Cambridge. 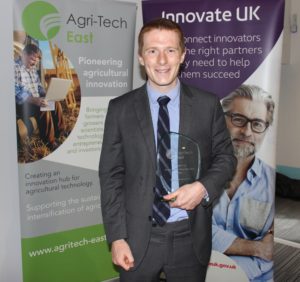 He continues: “I am delighted that the strength of our business plan has been recognised with the GROW award and would like to thank the management team of G’s Growers for their support and feedback. The next stage is to develop the concept further with G’s Growers as the first customer.”
GROW has been developed by Agri-Tech East to encourage entrepreneurship in the agri-food industry. Dr Clarke says: “Agri-Tech East’s vision is to be a globally recognised catalyst of open innovation and agri-entrepreneurship. Through GROW we are rapidly establishing a vehicle to find and support these new agri-businesses and by harnessing the power and diversity of our expert network we can also greatly increase their chances of success.”

SoftHarvest would allow lettuces to be picked to order with a fast turnaround, allowing producers to meet tight deadlines.

For more information about robotics come to our Pollinator.