At the end of January we hosted a Young Innovators’ Forum (YIF) visit to the Sainsbury Lab and Algal Innovation Centre, Cambridge University. This was visit as part of YIF programme which aims to bring together early career entrants from across farming, science and technology at innovative agri-business and research facilities.

On the night we were joined by farmers, scientists, researchers and engineers who were all interested to find out about the work happening in the lab. The Sainsbury Lab is a world 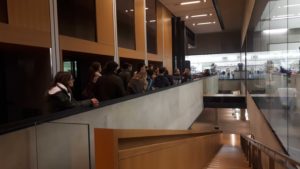 class research facility which opened in 2011. The group found out that the research which is carried out is exploring the regulatory systems which control growth and development in plants. We were able to get an insight into the labs as we walked through the building due to the open plan nature of the space. Unlike some research facilities, the Sainsbury Lab is unusual in having  individuals from different research groups sat on the same benches, which encourages more conversation and collaboration across different research strands. We heard about the findings of some of the research and particularly enjoyed finding out about the most unusual discovery which was made totally by accident when a plant was found to produce minerals that were previously only believed to be found in asteroids!

We then moved onto the Algal Innovation Centre which sits within the Botanic Gardens. A purpose built facility, the AIC provides a secure 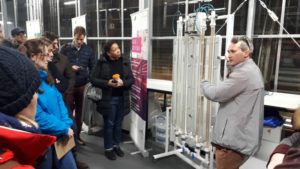 environment to carry out research into the uses and behaviour of algae. Matt Davey, Senior Research Associate, talked us through some of the different work which has been carried out within the lab. This includes working with a local water company on growing algae on waste nitrate which can then be used to produce energy by putting it into an anaerobic digester. We learnt about other research linked to the health food sector due to the fact that Omega oils, which in the past have been extracted from fish, an actually be captured from the algae which produces it. Some of 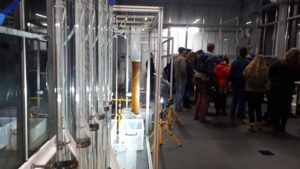 the work that Matt and his team have been carrying out is how to optimise growing conditions and nutrient supply, especially understanding how different algal strains survive in different climates. It was a surprise to learn that algal pigments can be found in everyday products such as Smarties and wine gums!

Finally, we were shown around the Plant Growth Facility. In this building there are lots of separate chambers in which all factors needed for plant growth can be controlled, such as humidity and light. This enables researchers to be able to drill down into the specific variables that might influence or affect a particular result. As we walked around the facility, we saw a range of plant species being tested on including wheat, potatoes and rice. These secure, air tight chambers also allow tests into plant pathogens to happen as they can be contained and assessed within a rigorous framework.

We were really lucky to be able to explore the Sainsbury Lab and Algal Innovation Centre. It was so interesting to hear about all the research that is going on which could impact the agricultural industry in the future.

As with all of our YIF events, attendees then had the opportunity to discuss the tours as well as talk about their experience and knowledge in the area. We chatted to some of the attendees to see what they got from attending the event, here is what they had to say:

The YIF visit was an excellent opportunity for industry members like ourselves to learn about the cutting-edge research being carried out in agricultural sectors. Having the opportunity to speak with leading researchers in algae growth and cultivation was fascinating and highly valuable for expanding our knowledge in this area! These events are great at increasing links between academia and industry to help us develop agricultural technology together more effectively.

The reason for attending the YIF visit was that I really wanted to try and apply what I have done so far with my research to a more applied science, and this was an incredible opportunity to know more about what is in between really basic science and the final application to a product. The Algal Innovation Centre looks like the kind of things I would like to go for the next step. From the visit I understood that they do laboratory research, but focusing on solving problems.

Don’t miss out on your chance to join us on a YIF visit, sign up to the newsletter now and head over to our webpage to find out about upcoming events.