“Milk is not just some white stuff that goes in a cup of tea, or on your cornflakes in the morning – it’s something that should be respected,” says Emily Norton, Partner at J. Norton & Sons and co-founder of Nortons Dairy in Norfolk. We spoke with her about dairy farming, diversification and women in agriculture.

Diversifying after the milk crash

The Norton family has farmed at Church Farm, Frettenham since 1946, but it was the milk crash of the 2000s that radically changed the business.

“We had always focused on producing high quality milk in order to maximise returns under the milk contract at the time,” explains Emily. “However we were very conscious that a big tanker would turn up in the morning to collect our milk and the effort we had put into making sure that milk was high quality was lost to us straight away.

“The milk crash in the mid-2000s was a historical low. However, we realised we had some of the skills and labour capacity on farm to be able to add a new business stream into the farm partnership. All the planets aligned to allow us to go ahead and do this. We started in 2007 running the dairy on-farm, so it’s actually our 10th anniversary this year.”

The milk is distributed through a doorstep delivery in the village and a wholesale round to local small businesses and shops in the Broadland area. Cheese and yogurt is also distributed and available throughout East Anglia from independent shops.

As well as selling other dairy products, Nortons Dairy runs educational visits for youngsters to explain the background and effort that goes into milk production.

“Once you put milk in a bottle it just becomes a commodity, rather than something that has been produced with love, care and attention and a huge amount of physical effort from everybody,” says Emily. “So maintaining a conversation and dialogue with the end customer is very important, to understand what it means to them as well as us.” 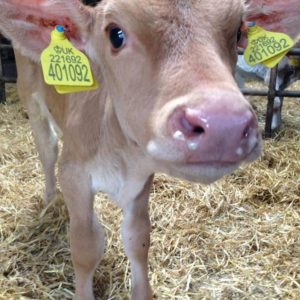 Well-being is very important at Nortons Dairy; the cows have names (such as ‘Daisy 20th’), drink filtered fresh water and use a voluntary milking system.

Emily says: “We are milking 55 cows on a voluntary milking system (Fullwood Merlin). It works on the basis of incentivising the cows to milk themselves.

“Each cow wears a pedometer – a bit like a Fitbit – so that it activates the robot when they walk in, and measures their activity. They also get some food while they are in there, so we are constantly motivating the cows.

“As a measure of productivity, we are now achieving the same yield of milk from fewer cows. In terms of the quality of the milk and the welfare of the cow, using Merlin means that labour effort can be put into looking after the cows instead. So herd management is of a much higher standard than when labour capacity was taken up with milking.” 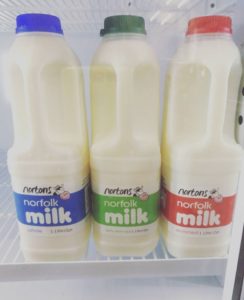 Emily helps run ‘Norfolk Ladies in Agriculture’, a networking group for women involved in a range of agricultural businesses.

She comments: “The group provides advice, inspiration and mentoring amongst other women involved in the industry. This is really important, as it is quite easy in farming businesses for anyone to get stuck in their own bubble, so it’s good to push yourself to meet with others.”

Agriculture is often perceived as a male-dominated industry, but the number of female farmers is rising; women now make up 28 per cent of the British agricultural workforce[1]. Emily is encouraging others to make a difference.

She says: “It is important for women to realise the value of teamwork. There is this feeling that you have to do everything yourself, which I think is a product of female liberation in the ‘60s. However, you can also rely on other people to help you achieve what you want to achieve.

“Rather than feeling swamped by your set of circumstances, your family situation or whatever the expectations are – realise that you can make a massive difference in your own right. You can contribute through leadership, building teams or getting stuck in whatever way you can.

“I would encourage any ladies involved in farming or environmental businesses in Norfolk to contact me if they would like to participate.”

Find out more about Nortons Dairy on their website: www.nortonsdairy.co.uk