Fun at the FUNgi Farm..! (Thanks George!)

Our latest YIF visit took us to a mushroom farm on a relatively warm November evening. May Farm, run by G’s Grower’s, sits outside Ely and produces 35 tonnes of mushrooms a day, which are delivered to the customers within 24 hours of being picked. We took a mix of young farmers, Cambridge University scientists, and some trainee agronomists and PhDs from NIAB to find out more. 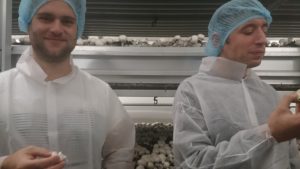 Charlie Kisby, Innovation Director at G’s, gave us a quick intro to the business. Producing a variety of crops across Europe, they are a vertically integrated business – so they plant seeds, grow plants, harvest and pack produce, market their produce and work the logistics to retail. Mushrooms are a recent addition to G’s Fresh produce offering, with May Farm having been built in 2012, and featuring not only modern facilities, but also a conscious attempt towards sustainability by including an onsite AD plant.

Mike Pimlott, farm manager, had us in lab coats and hairnets before entering the farm. We later learned through Q&A that this is to help inhibit competitor fungi establishing, as of course the conditions inside are perfect for fungal growth – so preventing the wrong kind of spores growing is vital.

It takes about 17 days from fresh compost/peat mix coming in to fully grown mushrooms being picked. Once the compost/peat mix has been installed, it’s really important to get the humidity and air temperature up as you can’t conventionally water the mushrooms once they’ve started growing – it will destroy the taste. We’re looking at 99% humidity and 25-30ltrs water going through before the first crop goes in!

The peat mix is pasteurised before adding the spawn (that’s mushrooms seed to you and I!). One of our attendees had previously heard that only one variety is grown here, but didn’t believe it – until Mike told him otherwise; different harvesting techniques or different age is what results in different types of white mushrooms for sale, not different varieties. Less popular mushrooms, such as shitake, are much more difficult to grow –they release their spores much more easily, which means a more hazardous environment for workers. 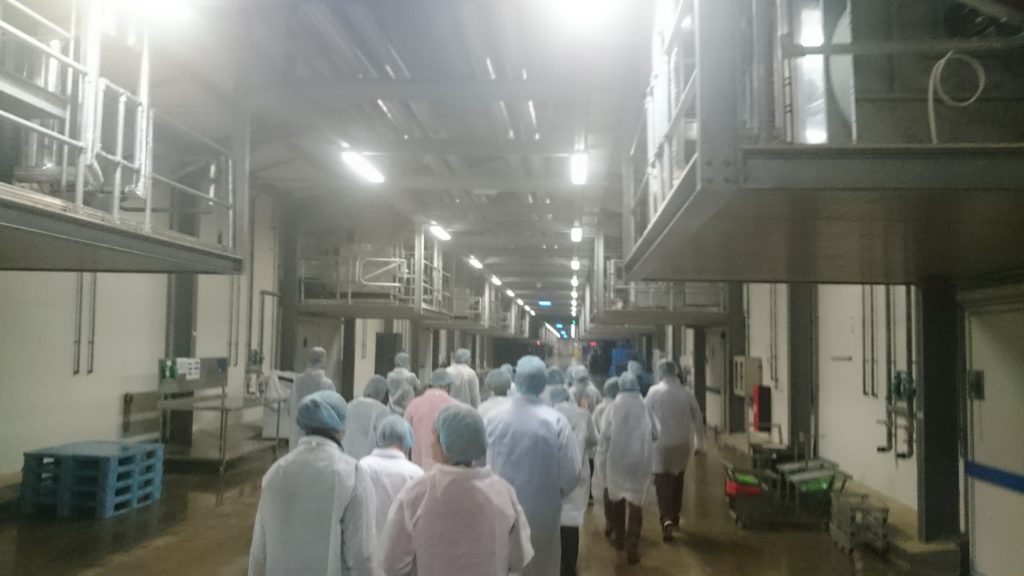 During the first 1-5 days of growth, air temperature and CO2 levels are reduced to stimulate the mould to produce mushrooms. This change in environment fools the fungus into thinking it will die and thus needs to propagate. A sharper temperature drop means more mushrooms – but of course, they are smaller, too.
All the energy needed to run the farm, included heating and cooling, is generated by the onsite AD plant; in fact, they produce excess which goes back into the grid. To give you an idea, they are using £4000 worth of electricity and hot water per week. To continue the green theme, May Farm have reduced their packing costs by 40% since they started operating – but more impressively, Mike still thinks there is room for improvement!

Mike’s #1 wish to improve efficiency in mushroom production? Automated harvesting. Harvest labour is currently the biggest cost to mushroom production, as it’s all picked by hand. Perhaps it’s up to our young innovators to make Mike’s dream a reality..!

Once we finished our tour of the mushroom farm, Charlie Kisby gave us an overview of a couple of projects they have been working on to reduce waste on salad crops. Their biggest challenge is making sure they grow the right amount for the demand, rather than too little or too much, which ends up going to waste.

Their first project, IceCAM, is all about trying to predict how much will be needed to meet demand at any given time. By factoring in weather, temperature, and predicted demand, growers are better informed about when to plant, how much, and if they will be short to meet demand. By informing them when no 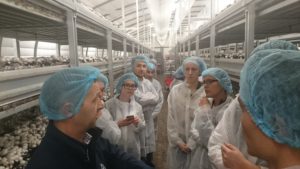 t to remove fleece from the lettuces (literally covering the lettuce with a warm fleece to help it grow in the colder months) they have managed to reduce the number of small head sizes significantly this year – all of which would not have been sold previously.

He also talked about AgriEye, which is based on new remote sensing technologies. Using visual map data, he has found that using variable nitrogen application rates hasn’t helped – but he did find that reducing applications on the better yielding land had no effect, so they are able to reduce the amount of nitrogen used. They’ve also developed an algorithm that means they can see exactly how many plants they have, and they can see where planting has been less effective (one example he showed us was the consistently smaller heads in a tramline, as a result of compaction.)

The next step is to integrate the two projects, so they can predict number of plants and size.

This is a really brief look at some of the things we learned during our visit – as usual, there is too much to put into just one post! A big thank you to Charlie and Mike at G’s Growers for giving our Young Innovators an insight into mushroom farming and some of the technologies being looked at in the fresh produce industry. 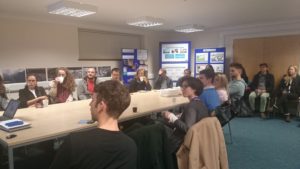