On the first sunny day for a while, we took a visit to the John Innes Centre in Norwich to learn about some of the latest plant 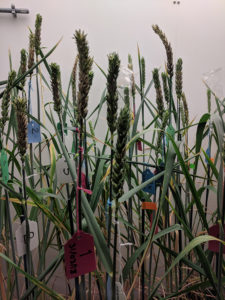 Four volunteers took us round to their various labs and experiments to help us get a sense of what was being worked on. They were each working in different labs so we learned the aims of the lab as well as their specific project. PhDs work on a particularproject for four years, from initial tests to their final report – which in some cases will have direct applications or may spawn further research based on what they discover.

First up was Ben Hales, also chair of the student voice committee. In his third year now, his research was most advanced. He showed us his experiments, situated in a plant growth chamber. In essence, he’s tying to pinpoint how Fusarium spreads in a wheat plant and identify which genes might have better resistance than others – so showing a slower rate of infection. To do this he injects Fusarium into wheat ears and documents its spread. You can then see which are being infected slower, and from there identify the key genes involved in resistance. His work is likely to provide tangible results – he’s already had some exciting developments.

Elliott Atkins was up next, working in Cathie Martin’s lab looking at improving nutritional value of crops. This researc 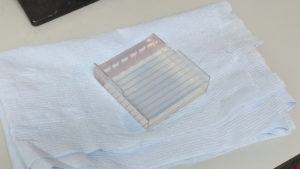 h is fascinating to say the least. Elliott specifically has a goal of reducing acidity in oranges. If they can achieve this, it means less sugar will need to be added to juices and orange flavoured products – helping reduce sugar intake of the public. Elliot is using baby kumquat to experiment on – it’s genetically very similar to orange but grows much faster – so it’s quicker to see results. Elliot is using CRISPR technology to replace genetic sequences with synthetic ones in order to test his hypotheses.

Shannon Woodhouse took us to her plant growth chambers to show us her work in brassicas. She’s exploring triggers in 69 lines (anything from kale to cauliflower) to explore how temperature changes affect flowering. This will be important as we know temperatures are likely to rise over winters due to global warming. She’s also taking into consideration the trigger for change between juvenile and adult switches, to see how long the juvenile phase lasts. At the moment, the standard measurement is the pencil test – which is to say, when the stem is as thick as a pencil, that’s when they are ready to switch (so not particularly scientific). However, the goal of Shannon’s researc 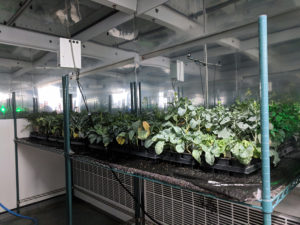 h is to make a simple assay test to help identify the flowering cycle of your specific plant and build allowances into your farm processes appropriately.

Finally, Danny Ward showed us a petri dish full of bacteria. His research was more molecular, looking at how bacteria infects plants (although it also will have applications in medicines, too). Much research has been carried out looking at more macro factors, such as soil conditions or temperature etc to try to determine how viruses can penetrate a plant, but none looking down to the level of DNA and the chemicals produced in these interactions. Hopefully Danny’s work will help us with both plant and medical virus spread.

That was a whirlwind tour of some of the research happening at JIC. I really recommend, if you’re interested to know more, going to visit yourself – there’s a whole a 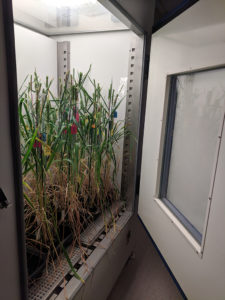 rray of work going on covering all aspects on plant science. All our hosts were remarkably good at communicating their work and talking through, not just what they are doing, but why they are doing it – how it could help farmers and growers, breeders, nutritionists, other researchers, and even consumers, which, at the end of the day, is what we are all interested in.