This October, we took our YIF group to Muntons Ingredients, who are a leading global player in the supply of malt, malt extracts and other malted ingredients for the food production industry. They also manufacture beer, wine and cider making kits. We were interested in Muntons for their approach to innovation and long-term investments at their Suffolk plant. The group (after donning some very fetching hairnets and hard hats) were able to discover the process of making malt from barley and wheat, followed by looking at the applications of malt in food production, brewing and tastings! 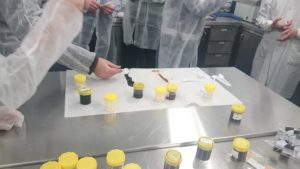 We learned that the barley sourced by Muntons is from a 60 mile radius of their site, with plants in Suffolk and Yorkshire near the best UK barley producers. The basic process by which malt is produced is steeping -> germination -> kilning. (A great video shown to us about how malt may have been discovered can be found here: https://youtu.be/WLCT-KMEaKQ). The barley is encouraged to germinate in giant containers for up to 4 days, which develops various sugars giving malt its distinctive properties and taste. To give you an idea of size, Muntons are germinating about 800 tonnes/week of barley in 4 germination boxes!

Large kilns dry the green malt from 45% moisture to 4% in just over a day. When the malt is ready to leave the kiln, heat exchangers recover as much of the heat as they can, reducing energy and environmental costs. After this the malt is passed through an airstream to strip off the roots (which are then used in pellets for feed).

We then moved over to looking at how malt can be used, in Muntons Centre for Excellence. During the 2008 recession, Muntons decided to invest in innovation so when the market levelled out again, they would be one step ahead of the competition. It might seem a brave move, but it is one that seems to have worked! The Centre is where Muntons are developing new products and understanding product applications, as well as creating recipes for consumers and customers in order to increase usage of malt products. 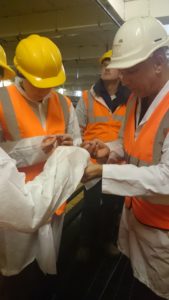 We taste-tested some of the applications, including a 1-2% addition of malt to bread mix resulting in a browner loaf and a more bready flavour. 4% extract into savoury biscuits created cheese flavour – tasting this, it was really strange to think there was no cheese at all in the product – only malt! We also tried the infamous malt brownies, where the test brownies has a significant amount of chocolate replaced with malt. While the texture was slightly different I actually preferred the malt one – it had a more chocolatey flavour! Food manufactures can use some locally-produced malt in lieu of some of the expensive, imported chocolate or cheese which keeps their costs and environmental impact down.

Next, we moved onto the microbrewery. This really was a hotbed for innovation – Muntons are able to try all kinds of new brews. They also have a masher which is unusual for microbreweries, but it does mean that they are able to test beers made from rice, maize and other unusual ingredients. The also add in different ingredients to flavour the beers – anything from pumpkin to cherries.

Muntons produce a lot of home brew kits and I actually found this a really interesting process. They are given a finished beer by a brewer, and they then have to deconstruct the formula to produce home brew kit that will produce the same flavour. The first one developed at Muntons was Golden Hen, for any beer fans. They are Europe’s largest manufacture of home brew kits, with the brewed equivalent of 620hectalitres being produced every 3 hours.

The spirit of innovation came across clearly during our time at Muntons – they fielded our questions easily (our young innovators do not hold back when it comes to challenging questions) and were very open about what they wanted to achieve and the processes they are taking to get there.

It really struck me how much work goes into producing our everyday foods – from the barley variety being developed and tested by seed breeders, to being planted and grown by the farmer, to being processed into malt by Muntons, and finally fermented into beer – and that’s just one drink out of all of the products Muntons can prepare malt for. To think about all the time, knowledge, expertise and investment put into your pint down the local is just totally overwhelming. I am just glad we have experts like Muntons to keep innovation happening in food production! 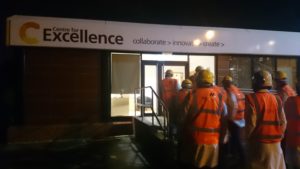 Many thanks to Muntons for hosting us. Learn more about the Young Innovator’s Forum –https://agri-tech-e.co.uk/yif/