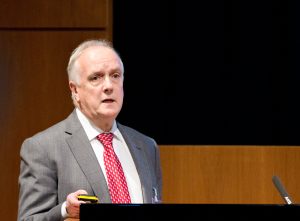 Despite recent advances in our knowledge of microbiology and genomics, many of the tests used to identify animal infections and support disease management are based on techniques developed over 30 years ago and are not always sufficiently sensitive to effectively control these diseases.

This is changing, with young companies within the agri-tech cluster using the latest science to develop powerful diagnostics. A number of people behind these companies will be speaking at the Agri-Tech East Pollinator ‘The 3 Rs of Diagnostics: Rapid, Reliable and Robust’ on 13 February 2019.

A good example of technology that needs improvement is the skin test for bovine TB. The UK agri sector knows only too well that using this as the key diagnostic test for TB has proved inadequate in identifying enough infected animals to control the disease – currently at an estimated annual cost of £100 million to the UK taxpayer.

We asked Dr Berwyn Clarke, CEO of PBD Biotech, to explain why a new approach is needed. He says:

“The current test for bovine TB is a skin test. The animal is exposed to extracts of the mycobacteria that cause this disease with a small injection into the skin.  If the animal shows an immune response – ie. the skin swells up – then it is assumed that the cow is infected with TB, and so it is culled and the farm is put under restriction until no more reactors are found.

“But the problem in using the skin test is that it is impossible to find animals in the early stage of infection and in some cases infected animals just don’t react at all, so it is difficult to eradicate the disease quickly.

“For some farms this can mean that, for months or years, they are unable to sell beef or milk and it is economically and emotionally devastating for those affected.

“The challenge in developing an effective diagnostic for mycobacteria is that the organism is very slow to grow using petri dish plates normally used to detect bacteria. Mycobacterium also has a very tough cell wall, so is difficult to break open to carry out DNA-based detection tests.

“We have developed a new approach using the latest science developed at the University of Nottingham, benefiting from recent advances in molecular biology.

“The method uses a type of virus, known as a phage, which only infects mycobacteria and can penetrate the thick cell wall. Once inside the mycobacteria the phage grows rapidly and breaks open the cell, releasing its DNA. This mycobacterial DNA can then be sensitively detected, even just a few cells, allowing confirmation of the presence or absence of bovine TB in samples within 6 hours.”

At the end of last year, after using Actiphage as part of a private eradication strategy, Devon vet Dick Sibley cleared a dairy herd of bovine TB reactors for the first time in 6 years. Following the success of this exercise, the UK Government acknowledged Actiphage’s potential and included the test in a new ‘Exceptional Private Use’ protocol so that it can now be used by farmers in England for chronic TB breakdowns.

PBD Biotech is a member of Agri-Tech East and has greatly benefited from the networking and profile this has offered. Berwyn first presented PBD Biotech in the Start-Up Showcase at REAP 2016 and demonstrated in the Technology Exhibition at REAP 2017.

Dr Clarke said: “The company has come a long way in the past two years. We’ve gained funding, UK Government approval, proven efficacy in field trials, had our test patented and opened a subsidiary office in Canada. We are grateful for the support that Agri-Tech East has given us.”

Actiphage is not just effective for bovine TB, but also other endemic livestock diseases such as Johne’s disease. This is a chronic wasting disease transmitted from mother to calf by bacteria shed in manure, colostrum and milk.

The presence in milk of the bacterium that causes Johne’s disease (Mycobacterium avium subspecies paratuberculosis, MAP) is also being investigated as a potential concern for human health as it has been linked to Crohn’s disease.

However, like bovine TB, Johne’s disease has proved difficult to control. With less than 5% of infected animals developing clinical signs of disease, it is difficult to identify these animals before they begin to spread disease. Current tests only allow the reliable detection of MAP in animals once they are over 18 months old.

A study presented at the European Association of Veterinary Laboratory Diagnosticians (EAVLD) Congress in October 2018 showed that the Actiphage test could detect Johne’s disease in the blood of new born calves. The test therefore creates a window of opportunity for the dairy industry to improve disease control.

Additionally, a milk trial, recently published in the journal of Food Microbiology, confirmed that the Actiphage milk test was able to detect very low levels of MAP.

Dr Clarke explains: “In a controlled study Actiphage was able to detect just 1-2 mycobacteria cells per 50 ml of pasteurised milk, highlighting just how sensitive this technology is.

“Mycobacterial diseases are a global challenge for the whole livestock industry, so the scale of the problem PBD Biotech is addressing is enormous.  In addition to detecting bovine TB and Johne’s disease in cattle the method can be used to detect other species of mycobacteria in any animal host including other livestock, wildlife, exotic and domestic animals. In many cases, Actiphage is allowing infections to be accurately identified in these animals for the first time.

“This new technology has the potential to revolutionise the control and understanding of mycobacterial diseases in a range of species, giving vets and farmers a head start on the race to catch bovine TB, Johne’s disease and other mycobacterial infections in the hope of preventing unnecessary culls when these infections spread unchecked.”

Dr Clarke will be speaking alongside Agri-Tech East members Analytik, RoboScientific and leaders in the field of diagnostics. The Agri-Tech East Pollinator: The 3 Rs of Plant and Animal Diagnostics: Rapid, Reliable and Robust (Enough) will be held on 13 February 2019, 2.00 – 5.30pm, at Incubyte Ltd, Cambridge Innovation Park, Denny End Road, Waterbeach, Cambridge, CB25 9QE.