Pre-emergence herbicide performance on earlier wheat crops drilled into dry soils has been variable this season, leaving some growers a tricky choice between applying post-emergence herbicides or spraying off with Roundup (glyphosate).

Ryan Hudson, a Velcourt agronomist, tried to adapt his herbicide programmes to work around the lack of moisture in the soil, but has seen varying levels of success.

“Where we now have black-grass problems, in most cases we held off drilling into dry seedbeds and the plan was to go in with fairly robust stacks of residual herbicide including triallate, Liberator (flufenacet + diflufenican) and pendimethalin. However, due to the dry weather we generally broke those back down into just Liberator at pre-emergence with the view that we could follow it up with more residuals once we had rainfall.” 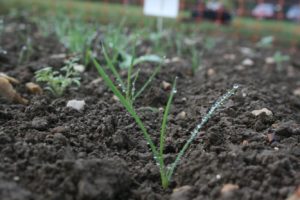 Where residuals were applied in good conditions there was good efficacy but due to the dry conditions some of the earlier pre-em applications have been more variable in performance: “I’ve had a few places where black-grass has come through but then we’ve had a reasonable amount of rain which has activated the herbicide and washed it into the soil, so we’ve started to see the black-grass reddening and whitening where the flufenacet is taking effect.

“In the areas we applied reduced pre-ems, we have come back with additional flufenacet and partner product to maintain residual activity against black-grass. Most crops will now have received a full dose of Liberator and a top up flufenacet plus partner product.”

But there are one or two places where a significant amount of black-grass has survived which may need a post-emergence contact herbicide as soon as possible.

“In this scenario we’d be looking at an Atlantis (mesosulfuron + iodosulfuron) and flufenacet follow up which will go on now while weather is mild and we can get a dry leaf.” Mr Hudson maintains that to avoid problems with resistance it is important to target the plant when it is small at 1 leaf, and more vulnerable to herbicide activity.

“In really bad situations, growers should consider the crops viability and seed return, possibly writing the crop off with Roundup to control the black-grass. You’ve got to be realistic about the level of control you’re going to get, especially if the farm historically has resistant black-grass.”

For growers considering Atlantis, a new OD formulation is available for the first time this autumn. Atlantis OD contains the same actives – mesosulfuron and iodosulfuron – as Atlantis WG but delivers them in a more effective oil dispersion (OD) formulation.

Across several years’ trials, there is a difference of 6% in overall black-grass control between Atlantis OD and Atlantis WG. Although relatively small, any small advantage can count for a lot with black-grass control particularly when pre-em performance is not as reliable due to dry conditions.

“The post-em is the final opportunity to maximise the level of control for the season,” says Dr Anderson-Taylor.  “That bit extra control will reduce plant numbers this season and, most importantly of all, reduce seed return for the following year.”