Earthworms are like the miner’s canary, indicating a problem with the underground world. They are sensitive to pH, water-logging, compaction, rotations, tillage and responsive to applications of organic matter. This is why there is a major project underway to investigate the use of earthworms as indicators of soil health.

Jackie Stroud, NERC Soil Security Fellow, is a world leading authority on earthworms, or “soil ecosystem engineers” as she calls them, and she has been investigating the relationship between type and abundance of earthworms and healthy soil.  She is one of the speakers at ‘Waiting for Worms’ the topic of our Water and Soil Health Special Interest Group event on 16th May 2018.

Earthworms are vital for healthy soils through their role in nutrient cycling. They incorporate organic material into the soil through their tissues and the mucus they secrete encourages microbial activity. Additionally their burrows improve drainage and aeration of the soil. These elements create a strong soil structure that allows water to permeate to the plant roots.

Jackie is leading a survey that is asking farmers to report on their earthworm populations to gain a better understanding of how they impact soil fertility. She discussed with us the complexity of using earthworms as indicators of soil health.

Tell us about earthworms – are there many types?

Earthworms are vital for healthy soils. This is largely through their role in nutrient cycling as they incorporate organic material into the soil through their tissues. Additionally, the mucus they secrete encourages microbial activity and their burrows improve drainage and aeration of the soil.

There are three main categories of earthworm and each has a different role:

Why are earthworms indicators of good soil health? 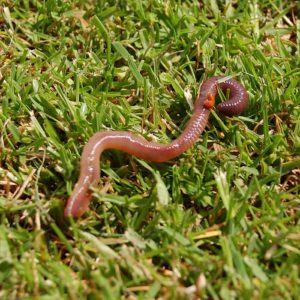 There are only ten common species in arable soils and mature earthworms can be easily identified into one of the three ecological groups – so knowing what you have, where they are and how many means that you have a fair idea of what is going on in the soil and how to get the best from it.

In all my years of digging soil pits I always find topsoil (endogeic) earthworms – even in fields used for potato production – so I am very cautious about using ‘earthworm numbers’ as an indicator of soil health without identifying the species.

For example, the presence of L.terrestris is a good indicator of soil health.

These large pencil sized earthworms are responsible for forming deep vertical burrows in the soil profile. They create food stores or middens above their permanent burrows and the soil directly under them is literally crawling with life – other types of earthworms and mesofauna – and this translates into improved soil structure, with better aggregation and porosity.

L.terrestris is abundant in soils that have a good structure. In reduced tillage soils there can be in excess of 30 middens per square metre, covering up to 40 per cent of the soil surface area – so these worms can have a substantial influence on soil properties.

In over-cultivated soils, I often find zero middens, suggesting a population collapse of this earthworm group. 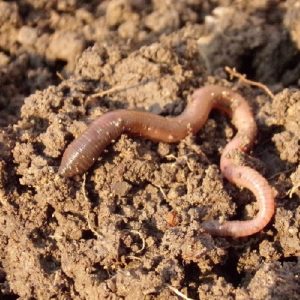 Earthworm science is advanced soil science, initiated by Charles Darwin hundreds of years ago and now it benefits from a body of knowledge built up through decades of detailed research.

One of the biggest challenges as a soil scientist is how to make meaningful measurements at field scale. I’ve rigorously tested a range of methods over the past few years, back and forth on field trials to local fields, the culmination of this is #60minworms challenge.

My initial findings using the #60minworm analysis framework has given consistent interpretations year-on-year and these have been cross referenced with the historical earthworm records from Rothamsted field trials.

The autumn measurements showed that up to 15% of fields have a local extinction of surface worms (epipeic) and up to 20% of fields have a population collapse of deep-burrowing earthworms (anecic) earthworms – indicating fields that have been over-worked.  However, most of the fields had considerable potential for the full suite of earthworms and their associated functions and about 5% of fields were teeming with life.

After being given these early warning signs land managers were able to make changes to tillage, rotation or organic matter practices to support better soil health.

The feedback was good – one of the first noticeable signs that a change in soil management practice is working is an improvement in earthworm populations – ‘if you can measure it, you can manage it’.

Putting it into practice

Thanks to excellent support from the NERC Soil Security Programme team, we have had many volunteers trial the #60minworm test on their own farms and they have provided feedback on the method and the results it gives.

This has been very useful in refining the method.  For example we have created a YouTube video to help people with the identification, and have improved the display of the  traffic-light signal interpretations including hatchings as well as colour for accessibility.

What has been really encouraging is that, regardless of the results being good or bad, people are reporting they intend to sample other fields to satisfy their own curiosity (and put my method through its paces). Where the worm populations has been shown to be depleted they have taken action to determine the cause in order to inform improved management practices.

Over 100 farmers have volunteered to try #60minworms this Spring.  A full suite of soil management practices, from conventional to organic practices, no-till to potato cropping are being tested, with the results providing a unique insight into  soil health.

It’s an easy test that takes approximately 60 minutes per field.  The results are being sent to me for analysis and interpretation to create a soil health ‘traffic-light’.

Many people have ideas and definitions for soil health, but to me, ‘soil health’ is an action – knowing what you have, in order to make it the best you can be.

Jackie will be talking at “Waiting for the Worms” a Water and Soil Health Special Interest Group event to be held at Morley Farms, Deopham Road, Morley St. Botolph, Wymondham, NR18 9DF on 16th May 2018.

Note: There are a small number of #60minworm packs survey packs still available. For more information please see @wormscience to take part in the survey.