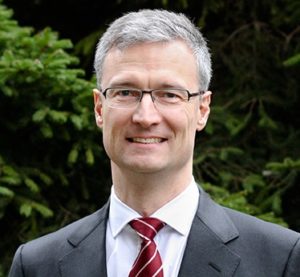 The big challenge for early stage entrepreneurs, seeking venture capital, is to become a compelling storyteller. To persuade a potential investor you need to create a narrative, almost like a spoken journalist, that holds the attention of the reader or listener, advises Michael Lee, Managing Director at Syngenta Ventures, who will be talking at the final of the GROW agri-tech business plan competition.

Michael Lee is based in Switzerland as part of the corporate venturing group. He helps identify early stage companies with a strong technology base or new business model for potential investment. The eight person team is spread across the UK, USA and Switzerland and its portfolio of business opportunities is mostly split 50:50 between Europe and the US, with a few investments in the rest of the world. We interviewed Michael about what is interesting to a corporate venture capitalist and what is not…

We all know by now that by 2050, there will be nine billion mouths to feed, so we would encourage entrepreneurs not to labour this too much. What we’re interested in hearing about from entrepreneurs who approach us are the tools and technologies that can help growers—and the ag industry—improve productivity and deliver on this challenge. There also needs to be a strong ‘go to market’ piece, because the way in which you are going to reach the market is a critical element of success. That is the best advice I can give to an entrepreneur. Tell us how to build a better mousetrap—and how it’s going to make its way to the market.

Although we are actively looking for new investments, we are selective and of the two hundred or so opportunities we see every year that are in scope we only invest in a small handful. It is expensive money and it needs to be invested in potential high growth companies. Probably two-thirds of all VC money in general is invested in California and the rest is divided up across the rest of the world, realistically, Europe and the east coast of the USA. In terms of ag-tech investing specifically, California, Holland and Israel are very strong.

The UK does well, but we could always do better: Silicon Valley is essentially built on Stanford University and we have something as good in Cambridge; we also have a load of institutes in and around agriculture, and time-zone wise the UK is more convenient for many parts of the world. Its always a great question to consider what changes could be made at a regulatory, legal and tax level to allow the east of England have even greater potential than it does now.

Syngenta Ventures’ is always juggling financial versus strategic priorities. Although I invest in agriculture, some elements would be out of scope, for example new crops or animal health, even if these might be financially interesting. We do look at companies that in time Syngenta may be able to partner with, however an equity investment and discussion of any future commercial agreement are kept separate, and negotiated by different entities inside Syngenta. You need to put money into a venture when it needs it, as opposed to waiting for a commercial agreement to be inked.

Is venturing led by open innovation?

To me open innovation is about accessing something similar, just more and better to what you already have in-house. For example, open innovation works well for the pharmaceutical industry, because basically the large pharma companies are looking to build their pipelines with new medicines. If they see something of interest it can be developed, trialled and distributed by the larger machine. They are better able to take a potential new treatment through clinical trials and commercialise it than an early-stage company, as they have the sales force and capability in place.

To some extent we also do that with corporate venturing. We are looking to gain access to technology and see where it is going. We invest in R&D platforms that the company could use – genomics, proteomics etc. In short, we use venturing as a window on the world. Other parts of Syngenta also have their own window – mergers and acquisitions, the licencing group – so collectively we might see the opportunity or threat coming, from whichever side of the house it’s approaching.

Disruptive innovation has potential to eat your lunch

However, there are other spaces in corporate venturing capital that aren’t really about open innovation, it is more about keeping an eye out for something that has the potential to turn the market on its head and could steal your lunch. An example of this could be Uber, Airbnb or Expedia – they weren’t interested in coming up with a better, faster taxi or a superior, more inviting hotel, they came up with something that sits on top of the lot; they don’t even own taxis or hotels.

If we are looking at the ‘Uberisation’ of a large company then we are challenging the status quo. The current business model for an agricultural company, for example, is relatively unchanged from the 1960s: take a promising new chemical and apply it to the whole field. With precision agriculture it is getting more targeted but it’s largely the same. But this is changing. The thinking is all about alternatives: spraying just the weeds not the whole field, targeting specific insects, avoiding chemistry altogether and using something else to eliminate the weed – lasers, mechanical hoes, detection using phenotyping technologies. This is very challenging for the incumbent industry but something I find exciting and the type of innovation that I go looking for.

Merging different technologies together may be required to deliver on these types of innovation than digging deeper into a single technology.

Tell me a good story

Open innovation is interesting because you are buying assets that feed your business model, but if you come across a disruptive asset where there is potential to partner globally then this is potentially much more exciting. To return to the storytelling analogy, two of the companies I’ve invested in recently were able to deliver a compelling story.

Phytech said: “There are loads of people in Silicon Valley who are trying to measure how crops are feeling and they’re doing it indirectly using measurements from satellites and sophisticated calculations. These are very clever people but it’s a difficult problem. “When you are ill you go to the doctor and they take your temperature. Why don’t we measure how the plants are feeling by taking measurements directly from the plant? Using a dendrometer, you can measure the water stress within the plant, not just day to day but if it’s changing within the hour.” We are already interfacing with lots of farmers and growers who have issues with water, we have an opportunity to help them not just with their pest or weed problems but also with their water problems.

As a company we can support Phytech not just with finance but also possibly with global access to farmers and global distribution – it’s a win-win for everybody. This is not about new chemistry but a bolt-on that adds value to the services we already offer. So it has strategic relevance to everybody. There’s a lot of water stress west of the Mississippi at the moment, and considerable water stress in the Middle East, Australia and parts of Asia, so finding innovative ways of managing water demand more effectively is a big business opportunity.

Another investment is Brandtone, a mobile marketing business, which appears a pretty odd business for Syngenta Ventures to be investing in. The nugget they came up with was: “Michael, do you want to be able to reach millions of smallholder farmers in emerging markets, at scale, at any particular time, to know what they grow, to know what their smallholding is and know where they live?” The answer is obviously yes. So it’s not really that they’ve got a better mousetrap or that they’re selling phones, but that they know how to get that information to market. They know I want to talk to smallholders; they may not know what I want to say, but they’re offering me a way in which I can reach millions of them when I want to. So if there are entrepreneurs in the east of England, with a disruptive technology, and a good story then we would be interested to hear it – ping us ideas on the website here.