So what is a robot and why do we need them?

There are two critical factors that separate a robot from a machine – the capacity to be autonomous or to act with some degree of decision, and presence of actuators, which allow a machine to alter its environments. This precludes computers and fridges from being called robots. 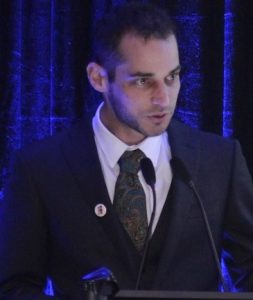 Dr Andre Rosendo, a Research Associate at the University of Cambridge (pictured right), and one of our speakers at the October Pollinator, explains: “We are using our knowledge of soft robotics to create deformable manipulators, or ‘hands’, that can manipulate ‘fragile’ produce, such as broccoli, strawberries and mushrooms and can handle and cut produce with the same handling care as human harvesters.

“In the future the robots will have the potential to help elderly people from their beds, to handle glasses as a bartender or to interact with children.”

The use of robots in the real world is less advanced than in sci-fi but not for long. With driverless cars taking to the streets of Milton Keynes (scared the concrete cows apparently) and Amazon delivering packages by drone in Cambridge, the potential for robotics to work alongside humans in a variable environment has become a reality.

Indeed all our speakers at the ‘Robocropping’ event believe that the technology is mature, and it just needs the finance and end-user input to make service robots robust enough to trust in the field. 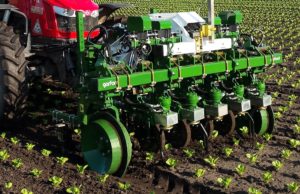 Professor Tom Duckett, who leads the Lincoln Centre for Autonomous Systems at the University of Lincoln, says: “Already we can envisage agricultural robots that could perform multiple tasks, for example, inter-changeable tools would allow switching between tasks such as seeding, tillage, spraying and harvesting.

“You could also have robots for agriculture and food production that would perform other useful tasks at the same time such as surveillance, keeping a watchful eye on crops, livestock and expensive farm machinery, while carrying out their primary duties on the farm or in the factory.”

A number of machinery companies are investing in the technology, for example Garford Farm Machinery, who are world leaders in automated weeding equipment and are working with Lincoln on a project in 3D imaging for robotic weeding.

Read more about the Pollinator from our events page.