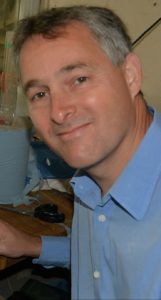 Animals suffering from an illness change their behaviour. A sick cow might lie down in a different area, split itself away from the herd or change its eating pattern. A new technology which detects these changes will make it easier for farmers to identify the early stages of disease.

Omnisense has developed an on-farm automated ‘early warning system’. It uses a tag on the cow’s collar to relay information every few seconds via sensors within the cow shed and should help to reduce the spread of infection.

Andy Thurman, CEO of Omnisense, explains:  “We have developed an accurate position and behaviour monitoring system which is easy to deploy within a barn and can be used to detect the early stages of disease.

“Small collar mounted radio sensors on the cows provide information on individual and herd behaviour. This is uniquely combined with knowledge of every cow’s position, enabling the software to establish the normal activity pattern for each animal, making it easier to identify abnormalities in behaviour. The farmer will be alerted to these changes by text or email.”

Currently disease detection relies heavily on direct observation of symptoms, so the disease can already be affecting the milk before it is diagnosed. For example, mastitis, an inflammation of the mammary gland and udder, is easily transferred from shared milking machinery. As milk from infected cows cannot be sold, the use of Omnisense’s technology could reduce the spread of infection and loss of income.

There are wider benefits as well; antibiotic resistance is a major health concern. Reducing infection rate will mean fewer animals need treatment and this will reduce the use of antibiotics in the UK’s 1.8 million dairy cows.

The Omnisense system has been extensively validated by a team of animal scientists from Writtle College, Exeter University and the Royal Veterinary College, along with mathematicians from Exeter University as part of a BBSRC grant to examine Wellbeing and Behaviour in Dairy Herds. This has included deployments to a number of farms, including continuous monitoring over six months of a herd of 120 dairy cows in order to identify the specific early changes that might be used to predict diseases. The findings are very promising with a number of activity, behaviour and disease indicators identified, leading to both the publication of academic papers and the development of automated algorithms to alert the farmers.

Omnisense were awarded further funding this year from The Eastern Agri-Tech Growth Initiative to develop a simple set-up process for their sophisticated indoor positioning system by non-expert installers, greatly increasing the Dairy market accessibility of their products.

Andy will be speaking at the September Pollinator, Engineering, electronics and software for agriculture, which is being held on Tuesday 22 September at Russell Smith Farms, Elmdonbury. To find out more visit the event page here.