Hairy flies that mimic the behaviour of honeybees are being conscripted by start-up Olombria (formerly known as POM) to overcome the dramatic decline in pollinators, it was announced at REAP 2017. The fly ‘body doubles’ are being lured to orchards by pheromones that encourage them to forage among the blossom, pollinating the crop as they do so.

The early-stage company participated in the Technology Exhibition at REAP.

Louis Alderson-Bythell, co-founder of POM, explains: “The numbers of bees and other wild pollinators have been decimated in recent years; although a number of initiatives are trying to boost the numbers of bees, we thought that the role of other pollinators was being overlooked.”

There are a number of species of fly that resemble bees and have hairy bodies that can trap pollen and transport it to the next flower. Their larvae also eat aphids and so have a dual benefit.

Alderson-Bythell was part of a team that entered the RCA’s entry to the 2017 Biodesign Challenge. Their solution uses pheromones to stimulate the fly’s foraging response; these chemicals are released through a series of nodes located through the orchard.

The flies themselves are easy to breed and die at the end of the season so do not need the same degree of care required by bees. POM believes that the large monocultures across California and Australia, which rely on migrant beekeepers, have the most to gain from its pollination system. 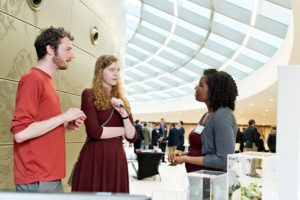 Alderson-Bythell says: “Over recent years we have seen flowering starting earlier, before the natural pollinators are inflight, which is creating additional demands on cultivated bees. These travelling bees are also prone to disease as their immune systems are compromised by access to a limited variety of food.

Olombria is working with leading agricultural research organisations including Imperial College, Rothamsted Research, and NIAB-EMR to develop an Internet-of-things (IoT) system consisting of a network of small nodes spread throughout an orchard. The nodes collect data and curate the behaviour of flies in the field. Olombria aims to work with natural systems to manage and support rather than exploit local ecosystems.

The start-up’s work originated from the RCA’s entry to the 2017 Biodesign Challenge and is led by RCA graduates Louis Alderson-Bythell, Tashia Tucker and Sam Roots, and current student Greg Swan.

SHOW YOUR INNOVATION AT REAP 2018

Participants in the REAP Start-Up Showcase are carefully selected to be some of the most exciting emerging agri-tech. However, if you have a product or service that you would like to exhibit there is an opportunity for a small number of organisations to participate in the Technology Exhibition.

More details about exhibiting at REAP.