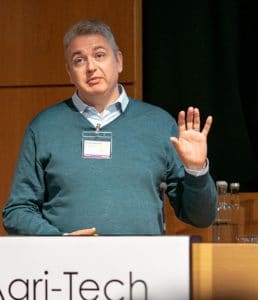 Early-stage animal health biotech developing first novel chemistry for 30 years Increasing resistance to anthelmintics, anti-parasitic drugs used to treat worms (nematodes) in cattle and other animals, is threatening the viability of the international livestock industry. There have been no new drug families with novel modes of action in cattle for 30 years. Now early-stage company Chalante has developed a parasiticide with a novel mode of action that promises a new approach to tackle this problem which impacts productivity.

Chalante is one of eight emerging agri-tech companies featured in this year’s REAP Start Up Showcase, hosted by membership network Agri-Tech East to profile the next big breakthroughs in agricultural innovation.

Simon Aspland (pictured) is General Manager of the animal health biotech, Chalante. He explains: “Most anthelmintics disrupt neuromuscular transmission in the nematode by focusing on a specific molecular target. This has put the nematode under evolutionary pressure and it has been able to develop resistance. “Our drugs target different molecular targets in nematodes, which they haven’t had a chance to develop a defence against yet, so this will be a new resistance breaking product.”

Cattle nematodes usually have a two-stage life-cycle, with eggs being shed in faeces. The larvae are able to live freely in pasture before being ingested by cattle. The larvae then migrate to the gut lining and mature to become worms. In the gut they absorb nutrients, depriving the host that then fails to thrive, reducing milk or meat production. Some cattle are resilient to the parasites and become carriers, re-infecting pastures through their faeces in future seasons. 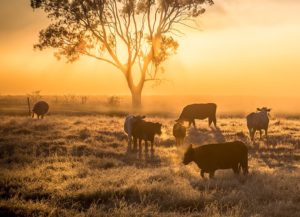 With an effective anthelmintic and management of the environment it would be possible to control these damaging parasites. Chalante has gained seed funding to develop two lead programmes: a monthly chewable preventative for heartworm in dogs, which is a life-threatening mosquito borne condition; and an injectable parasiticide to treat gastrointestinal nematodes and lungworms in cattle and other livestock.

The company has conducted initial trials, which demonstrate that the chemistries are effective against macrocyclic lactone-resistant pests.

The company has now entered Series A funding raising with the aim of further developing this work. Simon, who did his PhD in Cambridge, has a strong track record in biotech. He says: “Chalante is the fifth company of which I’m a co-founder. The most recent, co-founded through my work for innovation company Acidophil (acidophil.com), was a crop protection company called AgriMetis, and work on insecticides for crops provided part of the inspiration for working on parasiticides for animals.”

AgriMetis (www.agrimetis.com) raised $10 million Series A, $23.5 million Series B and it just closed a publicised deal around an insecticide with leading agricultural company Monsanto. In addition to co-founding AgriMetis, Acidophil has supported the creation and early development of Chalante.

Simon sees similar potential for Chalante: “Our focus is on developing innovative parasiticides that specifically address major problems in the animal industry. Our goal is to advance these products through the early high-risk stages and then partner with companies with capacity and experience to bring these products to market.”

Dr Belinda Clarke, Director of Agri-Tech East, which is developing an agri-tech cluster of farmers and producers, technologists and scientists, commented: “Resistance to antimicrobials and agro-chemicals is a growing, global problem for animal health and agriculture more widely. Chalante’s novel chemistry is a welcome addition to the armoury.”

Find out more at chalante.com.