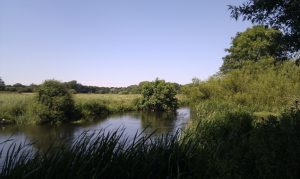 The University of East Anglia (UEA) will demonstrate how mitigation measures can limit the amount of nutrients and pesticides that end up in the river at the Royal Norfolk Show’s Innovation Hub, an initiative led by Agri-Tech East and the Royal Norfolk Agricultural Association (RNAA).

Kevin Hiscock, Professor of Environmental Sciences at UEA, says: “Working with farmers, the Wensum Demonstration Test Catchment Project provides an opportunity to test and assess the effectiveness of a variety of land management measures to reduce this contaminant runoff whilst maintaining farm profitability, which is of vital importance to the agricultural community.”

The Wensum is recognised as one of the most important chalk river habitats in the UK, with over 100 plant species and a rich invertebrate fauna. Endangered species that require conservation include Desmoulin’s Whorl Snail and the White-Clawed Crayfish, as well as vegetation such as Water Crowfoot and Starwort.

At the Innovation Hub, sponsored by the British Beet Research Organisation (BBRO), the UEA will be displaying a 3D model that demonstrates how agricultural activity can be adjusted to reduce loss of nutrients into the water course. Alongside this, there will be a demonstration water analysis laboratory and a display of the root systems of some of the cover crop plants that have been used as part of the project, to prevent nutrient losses. As well as presenting a problem for ecological systems, nitrate-based fertilisers can have other effects.

“It is important to detect the levels of nitrate to protect the quality of drinking water,” explains Kevin. “Alongside this, nitrogen applications in agriculture play a significant role in climate change. The action of soil microbes triggers the production and release of nitrous oxide.

“The Department for Environment, Food and Rural Affairs (DEFRA) estimates that nitrous oxide accounts for 55% of all UK agricultural sector greenhouse gas emissions. The main cause of nitrous oxide emissions is the application of synthetic fertiliser and livestock manure to arable soils. ”

“We hope that UEA research will benefit farmers, allowing them to maintain profitability whilst protecting a very precious, environmentally sensitive area,” says Kevin. “We hope to ensure the conservation of several valuable species, and to model best practice that can be emulated elsewhere nationally and internationally.”

The research has been of value to Farms & Estate Manager, Poul Hoveson, at Salle Farms Co. He says: “Our work with UEA on the DTC Project, has helped us to improve our understanding of nutrient movements in the soil. This has enabled us to have an integrated cultivation technique which optimises nutrient uptake as well as preventing leaching into streams. We have seen an improvement in soil structure which lowers our energy input and this has led to an improvement in our yields.”

The Innovation Hub will take place on 28 and 29 June 2017 on stand 271 at the Royal Norfolk Agricultural Association, Norfolk Showground, Dereham Road, Norwich.