New wheat genome sequence is the most accurate yet 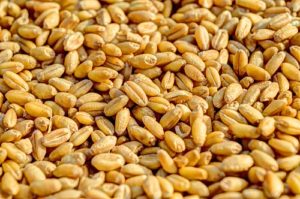 The wheat genome contains 17 billion bases – that’s five times the size of the human genome which has made it more difficult to sequence.  A major breakthrough has been made by a consortium led by the Earlham Institute, using new technologies has identified complete sets of genes and proteins essential to important agronomic traits in wheat creating a new wheat genome sequence assembly.

According to The Food and Agriculture Organisation of the United Nations, global crop yields must double by 2050 to meet future food security needs. Globally, wheat is one of the most important staple crops, providing a fifth of daily calories. Extensive knowledge of the wheat genome is needed to increase wheat yield in the future.

The most well-known genome project, The Human Genome Project, was completed in 2003 and the genomes of many organisms, including some plants, have also been decoded. However, despite the agricultural importance of wheat, the large size and hexaploid structure of its genome has made it historically difficult to fully sequence its chromosomes.

The new genome assembly, published in the journal Genome Research, predicts a large number of previously unknown wheat genes and defines where they are located along chromosomes.

The protein analysis research provided direct evidence that many of these genes coded for molecular machinery important for wheat growth and development, protection of wheat from diseases and resistance to harsh environments. This data helps researchers sift through the immense complexity of the wheat genome to identify which parts are playing an active role in the growth and development of wheat.

Over one thousand wheat disease resistance genes and their locations in the genome were revealed by the study. The knowledge will greatly aid marker assisted breeding of wheat disease traits. Also identified were over one hundred gluten genes, the analysis of which will be vital to changing gluten content in wheat.

The collaboration combined advances in genome sequencing and assembly technology from researchers based in Norwich, England at the Earlham Institute and the John Innes Centre with leading protein mass spectrometry data from the ARC Centre of Excellence in Plant Energy Biology at the University of Western Australia.

Professor Graham Moore, who leads the Designing Future Wheat Strategic Programme at the John Innes Centre, said: “The information generated by this project is already helping wheat breeding programmes in the UK and worldwide by providing a framework for selecting lines with improved characteristics, such as yield and disease resistance. This means wheat breeders can now develop new superior wheat varieties faster than ever before”.