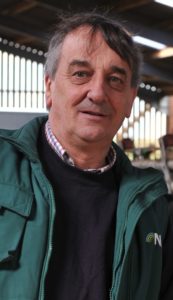 Meurig Raymond, President of the National Farmers Union, is giving a keynote speech at REAP. In the NFU manifesto it says that there is a need to plan a  forward-thinking growth strategy for UK science. We asked him “where do you think the direction should come from in the science strategy for agriculture?”

MR. Sadly, there is a perception throughout the supply chain that there are ample supplies of food around the world at the moment. But we all know the dynamics – that the world is going to have to increase food production by 60% over the next 30 years. That’s a big challenge, it’s going to need investment, and it’s going to need all the modern technology that will be at our disposal.

When I look at the east of England I see a wealth of world-class science, you have the John Innes Centre, Rothamsted, NIAB – all centres for excellence with a lot of research and development taking place, also there is now Agri-Tech East developing a vibrant cluster.

Q: So do you think it’s safe to leave the science strategy in the hands of the scientists then?

From my point of view I find it quite sad that scientists are not respected by society and by policy-makers as much as they were many years ago.  I’d like to see that respect return. We have some amazing scientists within the food and farming sector.

Q: You mention that we need a ‘functioning research pipeline’ and an ‘effective knowledge exchange infrastructure’. Do you not think it’s functioning at the moment? What do you think is the issue at the moment?

MR. The research centres, the levy boards, the AHDB all feed out information, but is it being read, studied and implemented? That is the next stage, isn’t it?

It’s about making information attractive and appropriate, and trying to encourage people to actually take up the message and use it. So it’s finding a way to get people to be more enthused. For example, I think there are some very good monitor farms around the country, which are doing some excellent work. But it’s important that the farming industry gets involved and actually gets behind what’s happening on these monitor farms.

Q: Do you feel that the NFU has a role in that?

MR. Most definitely, yes. We are very much part of the agri-tech strategy at a national level, and NFU East Anglia is involved at a regional level as well, so the NFU is another conduit for the translation of science.

Q: Following from that, a few years ago we had a disastrous harvest and the grain prices went high. During that time farmers invested in technology. This year we’ve had record yields and the prices have fallen, and some of the commodities are being sold for less than the cost of production. Do you think there’s any incentive for farmers to invest in technology to increase yields?

MR. We’ve seen some record yields across the country – I know the weather plays a huge part, but it’s a combination of the right weather conditions for the season plus the technology that’s available.

When farming was profitable three or four years ago it allowed farmers to invest, and that investment is now coming through within their business.

Now when I go around the country, I see a great number of farms adopting precision farming techniques; this investment can only come about through businesses being profitable.

Q: So you think the yields we’re seeing now are a direct result of their investment in precision farming technology?

MR. The weather has a huge part but yes. There is a higher level of professionalism in the industry.

Q: Talking about the weather, do you think there’s almost too much emphasis on yield, because now NIAB is showing that yields in trial plots can’t be achieved in the field because of the shortage of water? Do you think that there should also be an emphasis on minimising loss and increasing resilience? Do you think that’s an area that’s been overlooked?

MR. Farmers in general are fairly resilient! But obviously we’ve been fortunate with the weather pattern in the last two seasons in the UK. Now I’m starting to hear there are some big issues on the back of climate change in south Australia; our Australian colleagues are going to struggle to have a harvest.

Water will be so important and we can overcome a possible water shortage by making certain an investment is made in both improved water storage during the winter period; and secondly by better techniques of applying that water.

It’s about the availability of water, storing the water at the right time and then applying it to the crops in the correct manner. That needs further research, and also signals from government that they are fully behind British farming and British horticulture in particular. There ought to be a level of infrastructure and allowance granted by the Treasury to encourage farmers to invest.

I understand Agri-Tech East is looking at the water management strategy and how it can be best achieved. 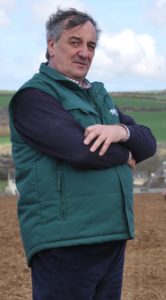 Q: You talked about the younger farmers adopting more technology, and we’ve seen that a lot in the east here. That sort of technology tends to be concentrated on the larger farms, but still the most productive farms are often those that are owner managed, where there is somebody there who’s got the experience and knows exactly about the land and so on. There are two sorts of risks here: that those sorts of farmers might get driven out and we might lose that expertise; but also, how do we help those farmers to adopt more technology? Do you see this as a problem?

MR. No. As I travel around the country I see some fantastic, fabulous family farming units, where it may be father-son or father-daughter, who have a 400-500 acre combinable crop farm and are doing a superb job and the attention to detail is pretty amazing.

The industry is progressing, there’s no doubt about that; it is becoming more professional – it has to – and at the end of the day we hear so much about sustainable intensification; that it’s about applying the right amount of nutrients, the right amount of plant protection, trying to increase the yields in those areas of the farm that can actually deliver those higher yields on the back of lower inputs.

It’s a case of everyone coming together from the research centres right down to the farm, and that pipeline has to be fairly flexible, has to be open, and people must recognise where to go to get the advice they need.

Q: So do you think perhaps that the more traditional farmers are not accessing that sort of expertise?

MR. People look for professional help and support. There wouldn’t be many arable farmers who don’t rely on an agronomist for some advice on their farm. People will study the NIAB list for varieties; they’ll read what the benefits are for a certain variety over another for what suits their farm. The majority of farmers will then rely on an agronomist once the crop is in the ground, to actually advise them on what inputs to put into those crops.

So an  independent and objective agronomist sector is really important. And these people need to be up to speed with developments.

Q: So is that where the research institutions should be focussing their attention? Making sure they have a good pipeline to the farmers through the agronomists?

MR. Yes, that pipeline’s so important. Feeding that information down there, encouraging farmers to read that information, take it on board and study it. That’s the virtuous circle, as I see it.

Q: Lastly, what do you think is the biggest innovation that you’ve seen recently that’s transformed farming?

MR. Big question! There is so much; it’s a combination of factors. I think in the arable sector it has to be precision farming.  The placement of fertiliser and plant protection products to within a few centimetres of where it is required. I think that has been a huge boost, from not wasting inputs, through to making certain it’s supplied to the right place, at the right time and so forth. That’s so important in the performance of the crop.

I guess as we look forward this is going to continue to improve, I know of farmers that are using drones to study the disease in their crops and so forth, and this type of information is all going to help as far as precision farming is concerned.

So I think that precision farming has probably been a big step in the right direction.