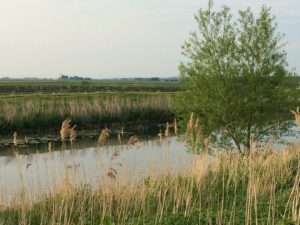 Tools developed with French farms have been shown to model the effects of land-use on water pollution. Hutchinsons see a role in the UK to advise improved cultivation on a field level.

Our rivers and waterways are adversely affected by diffuse pollution. Although agriculture is not the only source of this pollution, according to DEFRA figures it does contribute approximately 60% of nitrates, 25% of phosphorus and 70% of the sediments entering our waters.

Jeremy Macklin, Director of Technology and Innovation at Hutchinsons, believes that tools developed from a nationwide project in France could help farmers in the UK reduce the amount of pesticides and fertiliser that is wasted each year and as a result improve water quality, improve food sources for pollinators and reduce Greenhouse Gas emissions.

Jeremy says: “For the last seven years I have been working with a French national cooperative organization, Invivo, which represents about 60% of French farming.

“In 2007 the French Government accelerated the implementation of the EU sustainable use of pesticides directive and this included a commitment to cut pesticide usage by 50%. This would have a major impact on agriculture without a strong evidence-base to suggest that this reduction by itself would improve water quality.

“So Invivo, together with three leading research organisations, created a national project to collect the data that is needed to model the impacts of different land use strategies on the environment.”

Invivo worked with a network of 30 cooperatives from different parts of France, covering 265 farms and 17,000 hectares. The farms were representative of their regions and detailed information was collated about their agronomic practice. This information was fed into models which allowed data about volumes of escaping pesticides and nitrates to be cross-referenced with agricultural productivity.

The results from a sample of the farms, analyzing 250 fields of winter wheat, showed that those fields with lowest level of pesticide in the water also had a 6% increase in gross margin, showing that the pesticide had reached the target rather than being wasted. This was also true of the contribution to Greenhouse Gas emissions from fertilizer usage.

The model showed that it was possible to create predictive recommendations for farmers.

Jeremy explains: “The interesting aspect of the model is that it offers a win-win situation for farmers, the environment and the water companies.”

Hutchinsons are working with a number of organisations to pilot the tools developed in the French project and adapt them for use in the UK.

If you are interested in water management then do get involved in our Water for Agriculture SIG, register your interest with the contact form.