March 2020 saw Agri-TechE host the third of our Young Innovators’ Forum Conferences. A group of early agricultural career professionals and those working in related industries met at the Morley Business Centre to hear from a great line-up of speakers and take part in a series of workshops and a farm tour. The event was kindly hosted and supported by The Morley Agricultural Foundation.

The theme of the day? Innovation to balance conservation and farming.

With the ever-increasing focus on feeding a growing population as well as the need to improve the health of our environment, we wanted to consider how innovation from across industry, science and research may help to balance out these, often conflicting, priorities.  We invited experts from science, technology and agriculture to come along and talk about the work they are doing to address this balance.

We started off the day with a great talk from Charlie Curtis, Head of Future Farming at G’s – Cambs Farms Growers.  After giving a short introduction to the East Anglian farming company and their values, Charlie went on to talk about why the G’s operations in the Fens is so vital to their operations. In the summer seasons the Fenland operation produces 80% of the Summer season salads for the UK Group. The importance of this area has not gone unnoticed, and an NFU project report has been 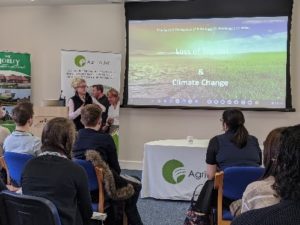 published which highlights the importance of the fens for food production, water management and wildlife with the aim to regenerate the Fens. Charlie touched on some of the strategies the business has looked to put in place to maintain this prime agriculture land whilst improving yields. One of them was looking at protecting soils, as one of the biggest issues with farming the area is the Fen Blow which can see 1cm of soil lost per year due to high winds.  A second project is looking at ‘nutrition farming’, considering and providing more about of what the plant needs, rather than what it wants, which can induce greater resistance and resilience in the plant. The final strand is focused on improving the biodiversity by creating a greater balance through a more holistic approach to farm operations.

“Conservation is not just about habitat creation – it is about creating balance between each of the areas and getting them to work alongside each other – not in competition but enhancing and protecting.”

Using the core principles of Regenerative Agriculture the business began to consider how they could plan for a more holistic approach, however, one central consideration was missing: conservation of wildlife and biodiversity. The G’s Camb’s Growers came up with their ‘Whole Farm Approach’ which considered the cyclical nature of all aspects of Regenerative Agriculture. This has 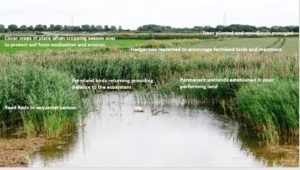 meant that work has been done to:

The work that has already been done has seen some positive impacts including species returning to the area, some of which are beneficial to pest control.

Charlie highlighted that all the decisions have to ultimately be made to ensure that yield levels are maintained as well as profits for the business, but there is scope for on-farm activities to develop and support the wider landscape without impacting these (and sometimes supporting them!).

How can environmental conservation and food production best be reconciled in the UK?

Next up was Lydia Collas, a PhD student in the Conservation Science Group at the University of Cambridge. Opening her talk with some context for the 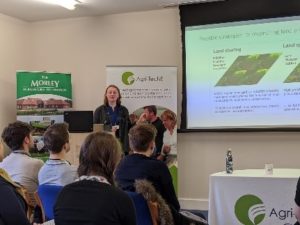 basis of the research, Lydia highlighted the decline in wildlife, more specifically birds,  over the last 50 years, with only a few species bucking the trend in more recent times. This was presented alongside the UK’s drive to achieve net zero in order to meet the climate change challenge. In agriculture, Lydia presented the need for a two- pronged approach,  with a combination of cutting emissions from farming as well as trying to find ways to store carbon. 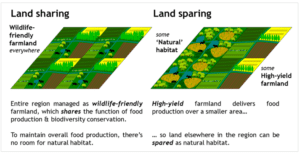 A study was conducted looking into increasing food production in two areas, the Fens & Salisbury Plain. In both locations, population sizes of varying species were higher under land sparing than conventional agricultural management but variations on land sparing performed even better (Finch et al, 2019). Across the world, research has proven that under a land sparing approach, there is greater biodiversity.  However, in the UK some may consider that we have already lost the species which are habitat specialists due to years of land change and that now we have farmland-adapted species which may then be lost under land sparing.

As part of her PhD, Lydia is looking at: farmer attitudes towards sparing; the reduction in food production and the feasibility of monitoring land sharing and sparing, with input from farmers themselves. This involves farmers answering questionnaires comprising questions on options that differ in terms of spatial extent, direction and payment rate. This is intended to help researchers understand what it would cost to pay farmers to take up different approaches. This will enable a bigger picture understanding of the costs associated with delivery of the benefits associated with sparing and sharing for a fixed target.

David Jones, Morley Farm Manager and John Wallace, Morley Agricultural Foundation Chairman, showed the attendees around the farm. David talked about the history of the farming at Morley as well as the Foundation. After 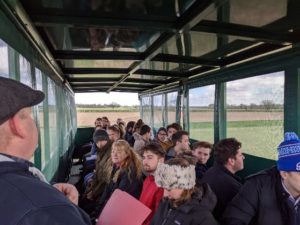 this he discussed the on-farm research carried out by NIAB TAG team, as well as the work done with the British Beet Research Organisation. David explained the different crops which are grown, and provided some weather data gathered from weather stations which are located across the farm. Weather presents a real challenge for UK farming due to how variable it is which was evidenced by the weather station data we were shown.

John then provided some context around the land needed to grow 1000 tonnes of wheat. This highlighted the need to grow as efficiently as possible in order to a) meet the growing demand for food, as well as b) provide areas for conservation purposes.

On the farm they are working on a clean water project which aims to make the water leaving the farm as clean as it possibly can be. As the farm sits at the top of the water catchment most of the water coming onto the farm is from rainfall. Work is being done to ‘slow the flow’ of the water, so that it drops its load as it leaves the farm to ensure that it is as clean as possible.

We learnt about the use of manure from a nearby farm which is spread on Morley’s fields to improve the soil quality and provide nutrition. Morley provide some hay as feed for the livestock on their neighbouring farm. This collaborative work between farms also highlights the benefits of a circular economy and making the most of all inputs and outputs.

soil looks like. Some of his research is on the impact of further learning around soil amendments, especially paper crumble, which could be seen in one of the soil samples.

Paper crumble historically had a bad press as a soil amendment, but by using a different process to produce the paper crumble, results have shown crumble to be effective in helping retain nitrogen and improve soil structure, unlike earlier iterations.

He also demonstrated how compaction of the soils can be assessed with a soil penetrometer. The soils’ absorptive capacity was demonstrated by using a specially designed tube filled with water, which when placed in contact with soil surface allows measurements of how long it takes water to drip into the soil.

There was also conversation around how crops retain nitrogen over winter and the effect of cover crops and whether they can help retain that nitrogen for use in spring crops.

Alison talked about the role of the Norfolk Rivers Trust, mentioning the particular importance of the chalk streams in the Broadlands catchment. Trying to slow the flow of water is a focus of her work with farms. Participants learnt about different methods which farmers are being advised to use. These include:

– The use of grass buffers (as seen in the picture) to reduce the energy of the water so that it can no longer hold any load (silt) trying to reduce the silt making it into the ditch.

– Using different machinery to reduce compaction in wheelings and redirecting water back into the crop and away from tramlines. This avoids tramlines becoming channels for water to wash away the topsoil.

– Silt traps (as seen in the picture) again reduce the flow of the water. A noticeable difference could be seen in the water before and after the silt trap.

Considerations which were also highlighted were the different measures which would need to be taken for different crops, growing cover crops to protect bare soils, as well as thinking about where gateways are, which can provide a direct path for water coming off the fields onto highways, for example.

Hannah McGrath, Waitrose PhD student based at Rothamsted Research and University of Reading

Hannah introduced the group to her PhD project which is exploring the use of flower margins in carrot crops to encourage natural enemies for the pests which may affect the crop.

As a group, the attendees then considered the costs of this approach to pest control, as opposed to traditional spraying, and how the two might differ. A key focus of Hannah’s research is in calculating the costs and benefits for carrot production of encouraging beneficial insects, in order to give growers a better idea of the financial impact of taking this kind of approach over solely relying on insecticides.

Hannah’s also directed attendees to consider that we should care about biodiversity not just for the financial benefits it can provide but ultimately for its own sake – just because it is there.

Each speaker provided valuable insights into how they are trying to address the balance of farming and conservation through innovation. We were privileged to have such a variety of speakers from different backgrounds, science and farming, as well as real life examples of where work is being done on-farm. Throughout the sessions attendees gained insight into large scale work being done across business and research projects into balancing farming and conservation, while still ensuring a high yielding profitable business, as well as ultimately highlighting how interconnected all aspects are in the greater picture.

Thank you to all of our speakers, attendees and Morley Agricultural Foundation for their continued support.