GROW: how to build a business in agri-tech

William Kendall, organic farmer, investor and entrepreneur took to the podium at REAP to announce the launch of Agri-Tech East’s GROW, the UK’s first Agri-Tech business plan competition that has the backing of leading ‘movers and shakers’ in the industry.

William is passionate about good food grown well and is keen to stimulate entrepreneurship within the farming community and for non-traditional players to see the market opportunities within this vital sector.

We asked him why he wanted to get involved in GROW.

Q Why do you think there is a need for GROW?

This competition is important not just because we hope it will stimulate some very good ideas, but also that it will encourage a new way of thinking in a sector which, for far too long, has assumed that somebody else is doing all the clever stuff.

That’s not to criticise the extraordinary work that’s going on here, but I hope to see a lot more, considering the amazing resources we have, not just in the east of England, but across the UK as a whole. That’s why I think this competition is very important.

Q You have been involved in a great many businesses, but what attracted you to entrepreneurship?

I just love new business. I’m held up as an entrepreneur frequently, and enterprise is the most important thing in my life. For me it’s all about new jobs, wealth creation, solving the world’s problems without the politicians, and a huge amount of personal fulfilment.

Entrepreneurship is also about undermining complacent businesses who think they have a right to things their own way.

Q So what do you want people to know about GROW?

The message I want to get across is that business creation is fun. I think that there is a moment in a business’ life when you can see it taking off.  When strangers come up to you and they start talking about your business – you think “it’s really beginning to work”.

My first lesson to business creators and entrepreneurs is: always plug your product. So those entrepreneurs out there, talk to the WI about your fantastic new universal ploughshare; don’t miss an opportunity, even if it’s the wrong group!

Q What do you think about the current state of agri-tech innovation?

I’m a farmer, so I hope I’m allowed to be a critic. But I find it depressing that the sector all too often come over as unimaginative and moribund, largely dependent on state aid.

I think this is changing. I think there is an awareness building about how important it all is.

The smart farmer shouldn’t think about buying new land – they should invest instead in research at their local university, or work with a local entrepreneur to develop a technology, which would solve their biggest hurdle in their existing operation. This would bring a bigger return than doing the same thing on more land.

There is now a real culture of entrepreneurialism in the UK – it’s a cool thing to do. That’s what this competition is all about!

Q Do you have words of encouragement for someone considering entering this competition?

For me the best business plans are the ones with a half-decent idea with some very good people with enough resources to make it work.

I’ve seen a lot business plans – I do the ‘Dragons Den’ type of thing for my living. So we’re not going to be giving the prize to the plan with the best ribbon around it, but to the one with the best ideas. We want lots and lots of good ideas!

There’s also some really good prizes – I wish they had been made available to me at some point, so thanks to all the organisations who have offered up their support with those.

Ultimately, we need lots and lots of entries, because it’s a very exciting initiative, and the more people who enter, the better, so tell everybody about it! 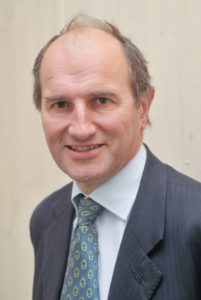 William led a team of entrepreneurs who spent nearly a decade building The New Covent Garden Soup Company into a very profitable brand which was eventually reversed into a listed company. With some of the same team he led the rescue of Green & Black’s, a loss-making embryonic business, which they eventually turned into a highly profitable international brand and sold to Cadbury plc in 2005.

He co-founded and chairs a niche venture advisor, Nemadi Advisors, through which he has exposure to investments in, amongst other things, retail, food, sustainable building products, water management and hotels. He is director of listed investment trust Keystone, and also specialises in advising family businesses including most recently Adnams and Notcutts in East Anglia, and elsewhere, Samworth Brothers, a very large food manufacturer.

He is a Trustee of the Grosvenor Estates and a director of its subsidiary, Wheatsheaf, which invests in innovative businesses in the energy and food security sectors.

William farms organically and conventionally in East Anglia and is a campaigner on rural issues and for better food.