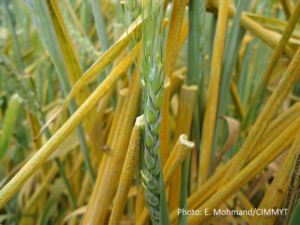 A new method to determine if a bread wheat variant is resistant to wheat yellow rust is now possible following the identification of new genetic markers by researchers at The Genome Analysis Centre (TGAC) and John Innes Centre (JIC).

Breeders will in future be able to make informed choices based on the presence of these markers.

Wheat is a major crop providing over 20% of the world’s calorie and 25% of its protein intake. This vital crop’s productivity is threatened by devastating diseases such as the wheat yellow rust pathogen (Puccinia striiformis f. sp. tritici) that infects bread wheat (Triticum aestivum L.)

Named after the yellow stripes that appear on the leaves of infected plants, yellow rust results in a heavily reduced or non-existent yield.  Furthermore, there has been a recent upsurge in what are known as ‘Warrior’ strains of this disease that infect wheat variants that were previously believed to have resistance.

To combat the threat of wheat yellow rust, breeders have developed wheat variants that incorporate resistance genes (R-genes) such as Yr15 which is taken from wild emmer (Triticum dicoccoides). However the complex hexaploid structure of wheat DNA, means that it remains difficult to accurately identify which plants should be used in breeding schemes to ensure that the resistance gene is present in the next generation.

The new research provides a new mechanism to identify whether or not a variant of wheat DNA contains the resistance gene.

The team sequenced the RNA of wheat plants that were known to either be susceptible or resistant to wheat yellow rust. By comparing the results, not only against each other, but also against existing models of bread wheat gene annotation, areas of genetic divergence were identified between the plants.

These differences, known as single nucleotide polymorphisms (SNPs), were used to locate an allele (number of alternative forms of the same gene) that was very frequent in the resistant plants while rare in the susceptible plants. This indicated the chromosomal arm where Yr15 is located. Further analysis identified the resistant gene out of the wheat’s three closely related genomes, supported by the bioinformatics pipeline developed for the project, PolyMarker.

This tool enabled the research team to select and design a set of genome specific primers to identify the genetic position of Yr15 and identify two SNPs that strongly indicate the presence of the resistance gene.

The study was funded by the BBSR and  led by Ricardo Ramirez-Gonzalez and Dr Mario Caccamo at TGAC and Dr Cristobal Uauy at the John Innes Centre (JIC), as part of an international team of scientists from agri-tech Institutes.

Ricardo Ramirez-Gonzalez says: “This study shows that despite the complexity of the wheat genome, it is possible to take advantage of next-generation sequencing as an addition to existing techniques, such as Bulk Segregant Analysis.”

The identification of these genetic markers facilitates a new method to ascertain if a bread wheat variant is resistant to wheat yellow rust. By checking for the presence of these markers within wheat plants, breeders will be more informed in their selection of which individuals to incorporate in their breeding strategy. In addition to this, the process used in this study may be applied to determine the location and markers for other genes within wheat and polyploid species.

Mario Caccamo, Director of TGAC and Ricardo’s PhD supervisor, said: “This study is a great example on how multidisciplinary research focused on tackling a very complex problem can rapidly yield excellent results. We brought together expertise in plant disease resistance, advance genomics technologies and computational biology to advance in a field of science that will have direct impact on our ability to fight a devastating crop disease.”