A new crop disease warning system being developed by Bayer CropScience can detect disease at the point of infection up to three weeks before the symptoms are seen. This early notice will enable farmers to optimise their disease control programmes, increasing yields and profitability. Better targeting of fungicides may also help to reduce the risk of resistance.

“We have seen that even a big spike in spores only translates into disease if the conditions are favourable for infection. Also there is a latent period between detection of spores and the observation of visible symptoms,” says Will Charlton, Fungicide Product Manager at Bayer CropScience. “This new information means that farmers will know when their crops have been infected up to three weeks before they can see the disease, allowing much more time to tackle the pathogen.

“If however, the weather conditions were unsuitable for infection then they can do a risk assessment and may decide not to spray for that pathogen at all.”

The pathogen detection device is fully automated. Air is sucked through the device bringing fungal spores, which are trapped and identified using LAMP (loop mediated isothermal amplification) DNA amplification.  This allows the farmer to see the number and type of spores; at present it identifies Septoria, yellow rust and brown rust in wheat.

Will believes that the device is distinctive and enhances the existing forecasting system: 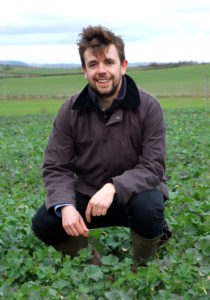 “This device is unique; it will fit into the existing risk modelling and crop monitoring forecast framework and will improve services such as CropMonitor, which provides measurements of disease and pest activity across the country.”

Results from the spore trap are wirelessly transmitted to a remote server, where the data is analysed and overlaid with information from the existing risk prediction network. Will sees the opportunity for expanding its capabilities in the future:

“Wheat is the biggest crop in the UK, so we are currently looking at Septoria, yellow rust and brown rust pathogens. However, once we have developed the proof of principle, we could include a wider range of crops and pathogens.”

The Cambridge-based company is developing the technology alongside Optisense, the Food and Environmental Research Agency (Fera) and the University of Hertfordshire, as part of an Innovate UK funded collaboration.

Will says: “We have built two prototype machines and they’ve been deployed in the field this summer. The project has got another 12 months to run, so we’d like to think that we can then start to develop a commercialised machine.”

Currently two prototype machines have been built, one of which was demonstrated at Bayer CropScience’s exhibition stand at REAP on 9 November 2016.