Designed by farmers, driven by GPS 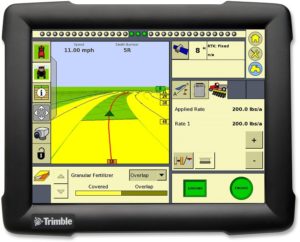 GPS positioning can be made accurate to within a few centimetres using a technique called ‘Real Time Kinematics’ developed by farmers. It can be used to guide farm machinery along controlled traffic systems, improving accuracy of inputs and minimising impact on the soil.

Norfolk-based arable farmer Robert Salmon is one of the pioneering farmers to make the move towards controlled traffic farming (CTF) and he is almost evangelical in his belief that when farmers reduce the amount of stress on their land it pays them back in dividends.

N E Salmon Ltd is hosting a farm visit for Agri-Tech East to share the latest thinking on CTF. Robert will be joined by PJ Walker, co-founder of RTK Farming, who, with three fellow farmers in Cambridgeshire, overcame the limitations of standard GPS to provide pinpoint accuracy needed for farming.

Robert explains: “We have been using RTK (Real Time Kinematics) guidance technology, the first step towards controlled traffic systems, for over ten years. By using RTK to constrain vehicles to permanent lanes, the plan is that eventually heavy machinery will drive over just 13 per cent of the 4,800 acres of land that N E Salmon farms – significantly reducing damage to the soil. “I have believed for a very long time that much of the effort put into cultivation is putting right the damage you have done yourself as a farmer, especially by being on the land when it’s too wet or freshly moved,” says Robert.

“By being more sensible in the way you travel across the field you are cultivating only for the benefit of the seed or crop which costs less money, fewer man hours and less fuel to achieve the same goal.” Over the next two years Robert’s family business at Hyde Hall, Dereham, will gradually change to a 12 metre controlled traffic system where the same permanent traffic lanes will be used by all machinery.

The system is made possible by RTK. PJ Walker explains: “A local positioning base station is used to “correct” the accuracy of the GPS signal from two-to-three metres to within a few centimetres. This correction is transmitted to the tractor by radio signal, and the auto steer system in the tractor can then use this information to triangulate between the satellite, the base station and the vehicle, allowing it to be accurate to within a few centimetres whilst moving.”

Increasingly heavyweight plant has caused untold stress and compaction damage to soil, reducing its porosity. Allowing machines unconstrained travel across the land can result in virtually all of the land being run over which compromises the drainage and friability of the soil. Robert is well aware of this issue; he has held a life-long interest in soil management. He will investigate how the move to controlled traffic farming changes the properties of the soil, and TAG (based at Morley) is already helping him to create a base line for future comparison.

The aim is to use the system on all N E Salmon Ltd’s crops (wheat, barley, oil seed rape, beans, AD maize and grass seed) with the exception of sugar beet. “In time this will just become part of what we do,” says Robert.

PJ agrees: “Repeatability is important as it allows farmers to accurately map their fields and place vehicles in exactly the same place year after year. It also means that we can accurately vary the rate of seed, fertiliser and other chemicals depending on the needs of the soil. “Combining high accuracy and repeatability means that you can greatly increase efficiency and therefore reduce costs. It also allows you to increase soil health and productivity, therefore increasing output while reducing input.”

The expansion of RTK Farming’s network has led the farmers to work with some of the industry’s biggest names, including their sponsors Bayer CropScience and SoilQuest, and attracting funding from Defra. Such is the interest already that N E Salmon Ltd is opening up the farm for an Agri-Tech East Pollinator meeting that will include a farm tour followed by a barbeque.

N E Salmon Ltd is hosting Agri-Tech East’s May Pollinator event, providing an opportunity to get up close and personal with the technologies that could represent the future of farming and to understand the risk-benefit analysis behind investing in CTF.

The Pollinator takes place from 4pm-8pm on Thursday 26 May. To find out more go to agri-tech-e.co.uk/events.