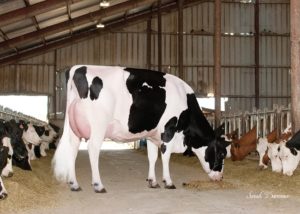 A major new study of Holstein dairy sires has confirmed that genomic indexes are a remarkably reliable predictor of actual daughter performance. This provides reassurance to the thousands of UK dairy producers who select service sires on the strength of an index based on their DNA.

The study, undertaken by AHDB Dairy, included every genomic sire marketed in the UK in August 2014 and compared its genomic index at that time with its daughter-proven index in August 2018.

Some 7,745 bulls were included in the analysis which showed there was little difference between their average genomic index in 2014 and their proven index four years later.

Marco Winters, head of animal genetics for AHDB Dairy says: “This study should give complete reassurance that UK genomic indexes are amongst the most stable and reliable in the world. Provided they chose their service sires wisely, the many producers who put their faith in genomic indexes should have made substantial genetic gains in their herds.”

Genomic indexes were introduced by AHDB Dairy for bulls marketed in the UK in 2012. At that time, the technology to calculate the indexes was still in its early stages, and producers were made aware they were more likely to change over time than indexes for proven sires which already had many daughters milking.

Full results from the study group are shown in Table 1. The correlation figure, also in the table, gives an indication of how close all of the sires are to that average change figure. Correlation figures for all traits were generally considered high, indicating there was a narrow spread of bulls around the average. In other words, as well as the average index in 2018 being close to, or the same as, the average in 2014, there was not a wide spread of bulls around that average. This means that most individual bulls’ indexes were close to their former prediction. The graph depicts this information in figures and indicates that between 2014 and 2018, 34.2 per cent of bulls’ indexes (in this case for Lifespan but equally applicable for other indexes) did not change at all and most others have changed very little.

A second analysis of a smaller sub-set of bulls which now have far more daughters showed exactly the same pattern. This gives further reassurance that as large numbers of daughters finally contribute to a bull’s index later in life, their indexes are still unlikely to see much change on average from their initial genomic predictions.

Marco continued: “We were confident in the system when we launched genomic indexes in the UK in 2012, and this analysis confirms the reliability of the techniques we used.”

Remarking that the UK teamed up with the USA, Canada and Italy to provide one of the largest reference populations in the word, he said this helped ensure the reliability of the UK indexes.