This is written by Luke Wing, Press Officer for Norfolk Young Farmers and stockman who joined us for a tour around Pudding Norton Farm near Fakenham.

Recently I was able to visit Pudding Norton Farm which is run by Robert Hambidge as part of a Young Innovators’ Forum visit. Robert is part of the Upper Wensum Farm Cluster group which consists of 23 farmers and 1 farm advisor. By being part of a cluster group, farms come together to benchmark goals and targets and report back on any benefits and pitfalls.

On arrival at Robert Hambidge’s farm, I was surprised to see how little equipment there was in the farm yard. However, as we progressed with the afternoon’s farm walk we were shown how little equipment was actually needed due to Robert employing ‘no-till’ (minimal soil disturbance from machinery) farming in order to preserve the soil and its ecology.

Having farmed here for many years, Robert discussed the experiences he had faced during his time farming here and the problems he had learnt from.  One of the issues discussed at length was the threat posed by the banning of farm pesticides, such as neonicotinoids, that have now been taken out of a farmer’s arsenal and the strengths and weaknesses of such chemicals.

health. Robert believes no land  should be left bare during the winter months, especially light land which he farms. On the farm Robert had sugar beet as well as bird mixes in stewardship strips down the field as part of the farms Countryside Stewardship Scheme. We learnt about the benefits for the whole ecosystem, including small birds, by providing food throughout the year. You may have seen Robert’s stunning display of sunflowers which was as a result of adding more sunflower seeds into a mix thinking there was not enough!

It was clear Robert had a passion for what he does and works tirelessly to ensure that the natural ecosystems can sit happily alongside his commercial farming system.

We also had the opportunity to hear from Eliza Emmett, who acts as the cluster group’s farm group advisor. Eliza discussed some of the benefits that working as a wider group has had for the farmers 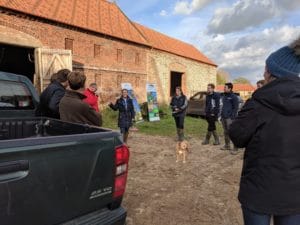 involved. As a group they meet frequently to discuss topics which are relevant to the members including soil health and landscape scale biodiversity. They are working on a range of targeted projects in order to boost the biodiversity across the area including pond restoration and boosting turtle dove numbers. During the tour we heard about some of the additional benefits of using learning from each farm to trial different ways of farming, as well as the work being done on the preservation of the Upper Wensum river.

This was my first experience of the Young Innovators’ Forum, it was tremendously successful and really worth my time. This is an invaluable opportunity for those early into their careers in agriculture, and other related industries, to pick up vital knowledge from industry leaders, experience innovative agri-business and practices as well as seeing where the future of farming could possibly be headed. Apart from taking away knowledge this is also a great time to network with other like-minded individuals.

Agri-Tech East’s Young Innovators’ Forum, kindly sponsored by The Morley Agricultural Foundation, is designed to help farmers and scientists understand more about each other’s worlds through a series of free to attend events.