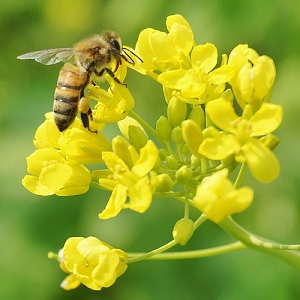 Insect pollination is important for oilseed rape but some varieties provide an inferior source of nectar.  Scientists researching the issue have found that the breeding system used can impact the amount and sugar content of the nectar.

The UK has around 250 bee species, including the domesticated honey bee. Like many other insect pollinators, these bees need sources of nectar and pollen. Lack of available food resources thought to be a major contributor to the decline in bee populations.

Dr Jonathan Carruthers, previously a PhD student from Newcastle University working at Rothamsted Research, explained: “We measured a range of floral traits in varieties of winter OSR grown in a glasshouse to test for variation within and between breeding systems. Specifically, we quantified 24-hour nectar secretion rate, the amount, concentration and ratio of nectar sugars per flower, and the sizes and number of flowers produced per plant from 24 varieties.”

Analyses of the data demonstrated that while the amounts of nectar and sugar were similar in varieties within the same breeding system, they varied between the breeding systems, being significantly greater in GMS hybrids than in CMS hybrids and open-pollinated varieties.  The researchers concluded that plant breeding could be used to create crop varieties with pollinator-friendly traits, benefiting both pollination services and crop production.

Professor Juliet Osborne, of the Environment and Sustainability Institute at the University of Exeter, said: “We got the idea for this study from beekeepers. Several approached us to ask if we knew why some varieties of oilseed rape didn’t seem to give as good a honey crop from their hives as they expected.

“Differences in nectar might not be the only reason for variable honey yields, but the research does show that we shouldn’t assume all oilseed rape crops are going to provide the same resources for pollinators.”