“Carbon avoidance, or carbon capture? What is the best strategy for Net Zero in agriculture?” asked delegates at the final Agri-Tech Week event of 2021, hosted by NIAB’s Eastern Agri-Tech Innovation Hub, headed up by Dr Lydia Smith.

There is no shortage of technologies to help avoid or reduce carbon emissions, and a number are in development at the Eastern Agri-Tech Innovation Hub in Soham, managed by NIAB. From Inspro’s automated bioconverter system using black soldier flies and food waste, to Cambond’s valorisation of low grade carbon materials (such as brewers’ spent grain, straw, hemp fibres and paper waste sludge) for the construction industry, and the hydroponic vertical farming system funded through the Interreg Hy4Dense project.

The Hy4Dense project is investigating the feasibility of year around production and also ways to reduce water use in cultivation, with a hydroponic system.

“As well as a 99 % reduction in water use, we can get 10-11 harvest cycles a year in a hydroponic system without supplementary heating, lighting or cooling,” commented Hy4Dense Project Manager Graham Taylor. “We’re also trialling different substrates such as flax, hemp and bamboo and are trialling reusable meshes to help reduce the carbon footprint.”

Graham suggests that natural light is often overlooked in controlled environments and yet even in winter daylight is a useful resource. He also revealed a surprising finding that green LEDs increased the yield of rocket, potentially as it is able to penetrate the dense canopy. 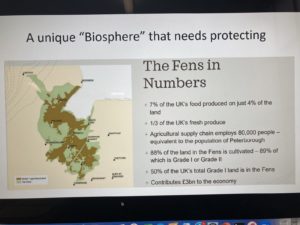 “We just lack the data” said Luke Palmer of FC Palmer & Sons, sharing his frustration about ambitious Government targets for lowland peat restoration amid a lack of information to inform appropriate practices to achieve them.

With 50 % of the UK’s Grade1 land in the Fens, making the right decisions now is critical to protect and manage this unique and productive resource.

Luke is working with NIAB and the Centre for Ecology and Hydrology on an Innovate UK-funded project to develop a novel gantry-based solar production system on his farm to enable water harvesting and storage as well as multi-cropping between the avenues of the solar panels.

All operations will happen from the gantry, protecting the soil from damage in the autumn.

Multispecies herbal leys  – a role in reducing in GHG emissions? 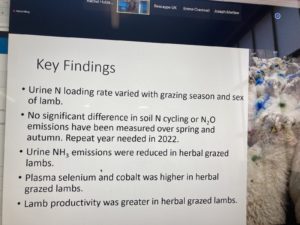 Herbal leys are permanent pasture with a mix of grasses and herbs. “We know herbal leys improve soils and increase ecosystem services,” said Emily Cooledge of Bangor University, “but we don’t know the impact they might have on productivity and GHG emissions in the animals grazing on them.”

With a wealth of heroically collected data (yes, urine and dung samples) from several sheep flocks, Emily has found a big reduction in ammonic emissions from lambs grazed on herbal leys. The loss of ammonia was almost halved.

She has also seen changes in blood biochemistry and live-weight gain in the animals grazed – the theory being that plants such as plantain, chicory, lucerne and sainfoin naturally contain secondary metabolites which impact the animals’ metabolism.

The go-to species when it comes to carbon sequestration are usual tree based, but according to agro-forestry consultant Jeremy Sweet, not all trees are created equal, and their future is not at all certain. “Beech, downy birch, oak, ash and elm are all projected to be more vulnerable in the east of England due to climate change” he pointed out, while extolling the virtues of inter-cropping as well as ensuring a cash return for fruit, nut, timber or biomass from tree crops.

Other crops – such as hemp – may also have a major role to play in carbon capture. “One hectare of industrial hemp can absorb 22 tonnes of environmental CO2”, claimed Nathaniel Loxley, Founding Director of the British Hemp Association. “And its big tap root  and rhizomal root network help to improve soil structure.”

British Hemp Association is working with the Innovative Farmers project to demonstrate the agronomic value of this versatile crop.

Viewers of “Autumnwatch” in the UK will be familiar with the Ken Hill estate in North west Norfolk.

Nick Padwick, the estate manager, discussed the benefits of putting biodiversity and carbon sequestration together. “Collaboration and partnership is key,” he commented “we direct drill, and use strip tillage (with shared machinery) and are in a partnership with a shepherd to bring his sheep onto the estate.”

A recurring theme of Agri-Tech Week – collaboration really does seem to be at the heart of making progress, whether it is carbon management, technology development or increasing on-farm productivity.

This event was hosted by NIAB.

Agri-Tech Week features a mix of in-person and virtual events that are designed to showcase exciting developments in agri-tech. It is coordinated by Agri-TechE working closely with partners across the innovation ecosystem and aims to provide opportunities to attract new customers and partners and to broker collaborations and international connections.