When Alfred Scrutton and Francis Goodchild opened their accountancy firm in Ipswich in 1919, it is unlikely that they would have imagined that the business would still exist today, let alone having offices in four counties and employing over 200 people. 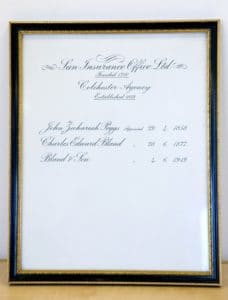 Scrutton Bland, as the firm is now known, is the product of a number of historical mergers and acquisitions between local accountancy and insurance businesses. Of these unions, the most impactful was the joining together of Suffolk-based Scrutton and Goodchild and Colchester insurance brokers Bland Fielden, both of whom were established in 1919 meaning that Scrutton Bland celebrates a double centenary in 2019.

Managing Partner Jason Fayers is proud of the firm’s history: “Our founding firms were established at the end of WW1 by soldiers returning from the Great War. They recognised the need for financial advice and insurance that the years of war had created and set up a service for both business and individuals to meet those needs. It is hard to imagine how life was back then, but one thing remains the same today, which is that people still need sound professional advice when it comes to their finances.”

In 1990 the firm rebranded as the Scrutton Bland Group, and in 2004 expanded its operations into Norfolk with the acquisition of Merrick Hill insurance brokers.

By the mid 2000s, the success of the Group meant that Scrutton Bland had outgrown both its Colchester and Ipswich offices, and in 2007 the firm expanded into a new building on Colchester Business Park and moved into an impressive three-story office on Ipswich’s Crown Street in 2014. In 2017 the firm expanded once again, this time northwards, increasing the size of its site in Diss and crossing over the border to open a new office in Cambridge later that year.

As it celebrates its 100th year, the current Scrutton Bland partnership team reflects on the firm’s long history and the position it has held for so long in local communities:

Tim Mulley, Senior Partner, thinks that the similarities between the business approach today and that of 100 years ago could be behind why the firm has prospered for so long:

“Our business is based on trust. Looking after people’s livelihoods, whether that is in business or their personal finances is a huge responsibility and one which we take very seriously. I think understanding what matters to our clients, and genuinely putting them first is what sets us apart and why we are still operating today.”

“We still approach everything we do from our clients’ perspective:, honesty, integrity and empathy are critical. In my view where so many businesses fail is that they view their clients merely as ‘commodities’, numbers on a spreadsheet – we’ve never operated that way. We see ourselves very much as part of the community within which our clients live and work, and that means we genuinely want to achieve the best for them. If we hadn’t maintained that integrity in our approach, I don’t think we would still be here 100 years on.”

Although boasting such a long history, the modern day Scrutton Bland is on a mission to position itself at the forefront of new technology. Having been one of the first adopters of cloud-based accounting in the region, the firm has recently secured exclusive partnership arrangements with online apps and software providers to ensure that it remains well positioned to adapt to its clients’ needs as both business and personal finances become increasingly digitalised.