About 50 per cent of AF Group farmers have invested in or have access to green energy, and renewables are becoming more core to the business as the benefits become more valuable than government incentives. The role of renewable energy within the farming mix is to be discussed at an Agri-Tech East meeting, ‘We’ve Got the Power; On-Farm Solutions to Energy Demands’ on 23 May, which is comparing experiences and considering new developments.

Jon Duffy, AF Group Chief Executive, comments that: “Although early installations focused on taking advantage of incentives to help farmers diversify their businesses and create extra revenue, more recently our members have been designing and installing systems according to their own consumption patterns.

“Solar is by far the most widespread due to its lower entry costs and certainty over performance, which benefits from the predictive science available in terms of sun or wind hours etc. The proportion investing in wind and /or AD is much smaller.

Belinda Clarke, Director of Agri-Tech East, comments that renewable energy always attracts interest from its diverse membership. “The amount of kit directed at on-farm energy generation was notable at Cereals this year and so was the interest in crops grown specifically to feed anaerobic digestion (AD) so discussion about the pros and cons of the approaches and innovations in the technology seemed timely.” 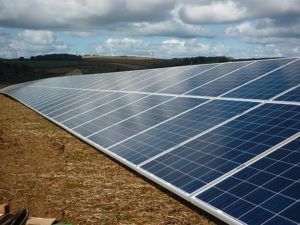 The event will see speakers from a number of different perspectives. Stretham Farmer Luke Palmer, Director of FC Palmer and Sons, comments that sustainability has been the driver behind a number of innovations adopted by the farm he runs with a number of partners.

He says; “The farm has been trying to seek technical advantages for years, be it from water management, precision farming techniques, or using less staff for more output.

“Solar panels were a conscious decision to diversify income and we were lucky to install 50kw solar panel arrays before the Feed in Tariff dropped to such low levels; these have been very successful but they are not without their foibles – inverters breaking, tripping, over heating etc. We have had a 7 year payback on the initial investment.”

When asked what advice Luke would give to his younger self he comments: “We aren’t really a farm that shouts about what we do but I want people to learn from our experiences.  My advice would be ‘don’t believe the hype’ – there is too much technology being offered. Also, if something is working well ‘don’t be revolutionary, be evolutionary’.”