New thinking for a new year

As 2016 draws to a close, it’s clear that challenging current orthodoxies is going to be the new norm. Inspired by discussions, debates and reflections during Agri-Tech Week, as well as many of the innovations we’ve seen throughout the year,we’ve pulled together some of the new thinking we’re going to be taking into 2017.

Reducing waste at every stage in production is high on everyone’s agenda. It not only boosts profitability quickly but also offers an exciting opportunity to enter new markets by creating the so-called “circular economy” – where one industry’s “waste” is the starting point for another’s value-added process.

Agri-Tech Week opened with a showcase of new technologies aimed at making new from old – from ultra-sonication to release and create valuable new chemicals from waste, to insect larvae feeding on leftover supermarket food to create biofuels.

Also discussed was the need to get crops to work harder. Discussion included how reducing the addition water and nutrients can stimulate plants to become more resilient and soft fruits such as tomatoes sweeter. The ‘Raising the Pulse’ event described how addition of too much nitrogen is counter productive and reduces the legumes’ nitrogen fixing activities.

Feed the soil not the plant

In his keynote address at the REAP conference, Gary Zimmer urged feeding the soil in order to feed the crop, presenting a huge opportunity to understand properly the biology, chemistry and even physics in the soil zone immediately around the plant root. It’s not about feeding the plant, says Zimmer – it’s about nurturing the soil.

It was pointed out that this strategy would require a rethink of current plant breeding programmes that are tailored towards an assumption about high input management regimes.

Perhaps with threat looming of imminent withdrawal of key chemicals this discussion is very timely?

Another event in the week looked at precision agriculture tools as a strategy for reducing chemical inputs. High resolution field mapping enables very specific tailored input application for key areas under challenge, rather than widespread treatment of the entire crop, allowing potential for bespoke management of problem areas, and even individual plants.

New thinking for crop and varietal breeding is emerging

Moving away from the soil to urban farms we heard at REAP about ‘cleanroom’ production of lettuces in sterile environments. Already breeders are looking for genetic traits to develop high value crops more amenable to growing in soil-free environments, such as coconut fibre and hydroponics.  It seems likely that these new facilities will be highly mechanised with specially designed robots offering autonomous selective harvesting one such robot, Dogtooth, made a dramatic entry into REAP.

This year has seen unprecedented political changes, promises of new R&D and Innovation funding, and the chance to create a new plan for British agriculture.

As the debate continues about the role of the industry to provide food, or deliver environmental services, understanding the crucial role of agriculture in the nation’s health and well-being cannot be ignored. So hopefully the new political thinking will also be mindful of the potential for agriculture to contribute to the health economy as well.

Whether it’s growing fruit, vegetables, roots and cereals with enhanced nutritional benefits, farming to increase soil “livestock,” or deploying new technologies to manage inputs more effectively, we’re sure of one thing – 2017 will see us ringing in the new thinking of the future.

Wishing you a Merry Christmas and a successful 2017. 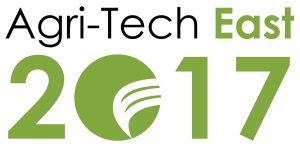