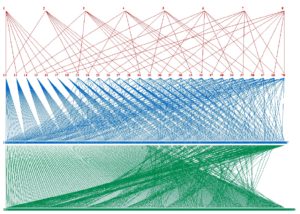 Use of multiple parents has enabled NIAB to produce pre-breeding lines of wheat that perform better for a range of traits including yield and disease resistance than any of the eight starting parents.

One of the real advantages of MAGIC for breeding is that new genetic combinations are created from the re-shuffling of the starting varieties.

The NIAB Elite MAGIC population has eight winter wheat pre-breeding lines as its founders (starting point). However, the lines developed from repeated inter-crossing of these lines perform better than any of the eight founders. This is the result of new genetic combinations, known as “transgressive segregation”.

It is also possible to assign these genetic effects to known positions with high precision, thereby speeding up their characterisation and exploitation.

“However, the challenge of securing future food security now looms large and there are signs that wheat yields are plateauing in Europe and elsewhere around the world despite increases in genetic potential (a phenomenon known as the “yield gap”).

“Added to this is the threat to arable farming caused by unstable seasonal conditions and there is pressure on farmers to reduce their environmental footprint by reducing agrochemical inputs.

“These factors, and many others, combine to present a huge challenge to wheat breeding and production. Driving genetic improvement has always been the focus of breeding, but new strategies are needed to accelerate this more than ever before.”