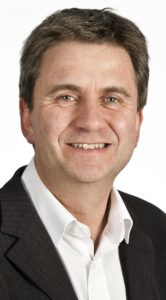 “Soil is the most important natural resource a farmer has and we know surprisingly little about what makes it tick,” explains Professor John Crawford, co-chair at the launch of the new Soil Health Special Interest Group.

John, who is the Associate Director of Research at Rothamsted Research, discussed exciting new research that suggests microbes may play a more fundamental role in maintaining the structure and nutritional content of soil than previously thought; a healthy microbial ecosystem could improve the soil’s resilience and productivity.

“For example, people may think soil structure is random, but our research suggests that it is anything but. The question that interests me is: if structure isn’t random, then what is organising it?”

It is the pore-scale physical structure that maintains the balance of air and water in the soil and is one of the most important factors affecting soil processes, including nutrient cycling and carbon capture. Work at Rothamsted Research is studying how this structure arises out of an interaction between microbial activity and particle aggregation within the soil.

“Micro-organisms have a vested interest in maintaining a beneficial structure,” continues John. “To survive they need the right amount of oxygen, water and nutrients from plants to flow through the soil. Leaving this to chance is far too risky, and there is evidence that microbes have been engineering their physical environments since the earliest fossil record.”

The team at Rothamsted are modelling the interactions between particles and microbes that give rise to the soil’s unique material properties. Together with experimental evidence these findings show that microbes change structure in a way that can profoundly affect their own microenvironments in soil. This can result in a 1,000-fold increase in the rate of water movement at these small scales.

“The soil ecosystem appears to be self-organising,” says John. “Microbial activity varies from pore to pore. The hypothesis is that where these microenvironments are beneficial, the microbes are thriving and they release a substance called extracellular polysaccharides (EPS) at a higher rate. This is basically glue that binds the soil particles together and protects these beneficial microenvironments against disruption. The net effect is that over time, the favourable microenvironments predominate over the less favourable ones. We believe this is an important process that maintains soils’ natural fertility.”

The importance of biofilms in soil – microbes embedded within EPS – is becoming increasingly recognised. As well as their potential role in self-organisation biofilms can improve resilience by protecting microbes from desiccation or pollutants and improving salt tolerance. A greater knowledge of the role of biofilms will improve understanding of water and nutrient cycles in the soil.

John continues: “Soil is a dynamic system. It is subject to disturbance all the time, from plant roots, wetting and drying, tillage etc. Where these disturbances alter the soil microenvironment to create conditions which are less ideal, for example because of too much or too little water, microbial activity is lower and the microenvironment is more likely to become disrupted. It’s through this reorganisation that the structure may become more advantageous to the resident microbial community. If not, the soil keeps being reorganised until microbes can flourish.”

In the same way that we use X-ray computed microtomography (CT) in hospitals to assess human health, the team at Rothamsted Research are working with the University of Nottingham to use similar technology optimised to ‘image’ the health of soil. Using CT imaging and techniques borrowed from computer game technology, John’s team has developed a ‘fly-through’ by scanning soil mounted on a pinhead.

This unique view allows researchers to see and quantify the organisation of soil on a micro-scale, revealing a network of ‘tunnels’ through the soil (view the fly-through here).

John explains: “The ‘fly-through’ is a particularly clear way to demonstrate the organisation that exists at the pore scale in soil. If the structure wasn’t organised, we wouldn’t be able to fly through as there would be too many dead ends.”

This ‘grass roots’ science is vital for farming, both now and for the future. Soil is a precious and vulnerable resource, as the recent ‘fen blows’ demonstrated, where centimetres of dry soil and newly planted seed were removed in a few hours.

Using CT technology and mathematical modelling, John and his colleagues are looking at how different management practises affect the fine scale architecture of soil.

“We are incredibly lucky at Rothamsted Research to have the longest running ecological experiment in the world,” says John. “For over 170 years we have had areas of land under different management practises; our next step is to look at how these practices have affected the capacity of soil to self-organise and how this impacts on long-term sustainability.

“Our end goal is to find better ways of enhancing the productivity, efficiency and resilience of soil. This could be through new regimes of soil nutrition that feed the plant and the soil, changes in tillage practise, or the identification of novel plant traits that improve soil. As our research progresses, hopefully these answers will become clear.”

The  Soil Health Special Interest Group, co-chaired by John Crawford, Dr Tony Miller from the John Innes Centre, and David Felce of Agrii, was launched on  8th September. An event report will be available shortly for attendees and Agri-Tech East members.