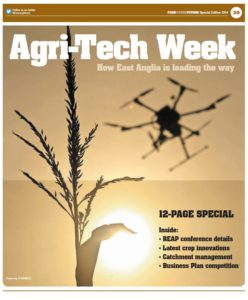 East Anglia is at the heart of a global industry so it is only fitting that a new publication aimed at farmers in the region is called “Farming World”.

The pilot edition produced by Archant features a special 12-page section to coincide with Agri-Tech Week, a series of conferences and events showcasing the latest innovations in the sector, which takes place across region between November 8 and 16.

Shaun Lowthorpe, editor of the pilot edition, said: “ To many minds, farming is a traditional practice which conjures up nostalgic images of a long lost rural world. And yet the reality could not be further from the truth.

“In this one-off prototype publication, we wanted to move away from the stereotypes and tell the story of farming as it is today.

“And with the food and science research centres of Norwich and Cambridge on our doorstep, we also wanted to make the link between farming and science.”

He said he turned to Archant’s heritage when thinking of a name for the new product, after company archivist Rosemary Dixon found a picture in the archives showing the original Farming World, then published by Eastern Counties Newspapers, coming off the presses in 1959. 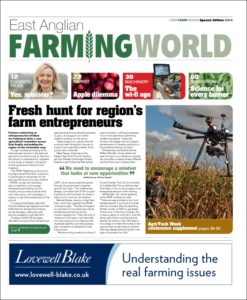 “The original East Anglian Farming World was a weekly newspaper, produced by us, telling the story of farming and agriculture across the Eastern Counties,” he said.  “We felt the name was as fitting in 2014 as it was between 1959 and 1970 when the original Farming World was published.

“We want to further develop Farming World and hope to bring out more issues next year,” he added. “One of the aims of the prototype is to test what farmers think of the publication, and a questionnaire will be included inside so that we can carry out that research. As a thank you, we will enter all completed questionnaires into a draw to win an i-pad mini.”