The much-anticipated AgFunder report for 2022 has landed, revealing the voracious global investor appetite 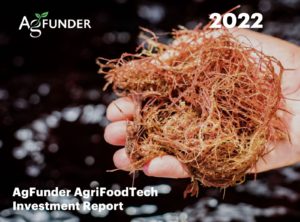 for agri-food tech continues. The report reveals pretty much a steady-state position for tech for on-farm solutions but an explosion in e-grocery and alternate meats and novel foods.

UK-based deals reached £1.3bn in value, its highest since AgFunder has been collecting the data, 2020 saw £1.1bn of investment.

According to the report, a whopping $57.1 bn was invested into agri-food tech companies in 2021, an increase of 85% on 2020. This is accompanied by more investment in late-stage deals, revealing that the global sector has, indeed, grown up.

Over the last 8 years Agri-TechE has seen the agri-tech sector mature and the investment has grown with the businesses. In fact the UK lies 5th in the global ranking of deals by country just behind Germany, India, China and the USA.

Notable UK deals among our membership that have contributed to this figure include:

Interest in different streams of Agri-Tech has shifted

The interest in different areas of agri-tech, however, has shifted.

Measure to manage – farm management software companies accounted for nearly 10% of deals – an increase of 29% from 2020. Investment in companies active in this area, along with sensing and “Internet of things” technologies increased by 51% year on year – revealing the continued demand for the “measure to manage” approach on-farms and the central role of data-led decision-making.

Indoor farming – globally, investors also appeared to have renewed appetite in technologies for indoor farming in 2021 (with a UK example being Scotland’s Intelligent Growth Solutions receiving a £42m Series B investment).

Given the continued expansion of indoor farming facilities in the UK, and enhanced focus about food security resulting from Brexit, the pandemic and the situation in Ukraine, it is clear that investors believe the potential for controlled environment production remains significant.

Ag-biotech – gene-editing and synthetic biology, with molecular tools secured around 5% of the global investment – the acceleration of this sub-sector will no doubt also be keenly following regulatory positions, particularly in Europe, which will affect investor confidence.

E-grocery – there is still no doubt, however, that all of this is dwarfed by e-grocery which attracted over 1/3 of all global investment.

With the impact of the pandemic, and challenges facing the supply chain, it is clear that our relationship with how consumers obtain their food has changed forever. And with the increasing focus on net zero and addressing climate change, the race is on for these technologies to deliver at all levels of the value chain.