The season for agricultural trade shows, open days, field walks, demonstration farm visits, technical seminars, and other industry events is at its peak right now, offering a wealth of opportunities for farmers to see best practice in action. But how can we speed up the process by which best practice becomes common practice, and what are the barriers to be overcome?

As we outlined in our report last year, From Grass Roots to Blue Skies, there is a major productivity gap between the best-performing farms and the rest. While soil type, weather and other factors may play a role, the disparity between the Championship league producers and the farmers struggling to make a living is significant – but potentially addressable. 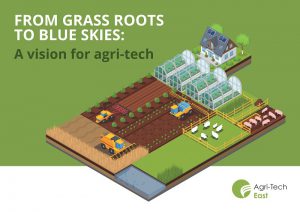 It is widely hoped that innovation is the key to tackling this gap. Among our membership alone we are seeing the development of novel sensors, imaging and positioning technologies, data platforms, robotics, automation, chemistries and engineering solutions, all of which are designed to improve efficiency, productivity and sustainability of the industry.

The theory suggests that the “early adopter” farmers will trial new methods, services, practices and technologies, and that their experiences will help trigger “spillover” into the mainstream industry. Suitably de-risked by someone else, perhaps with a recommendation by a trusted colleague and an “in-person” sight of something on another farm, means a farmer or cooperative is more likely to follow by example and be persuaded into investment and adoption of a new way of working.

Yet how effective is this spillover effect? How can it be accelerated and farmers given confidence in new research outputs and technological developments, especially when margins are so tight and there is so much uncertainty in the industry? A better mechanism is needed for helping incentivise this spillover without disadvantaging the lead adopters who have taken most of the risk.

As we discussed in last month’s blog, the public sector is looking to help de-risk this process and help innovation adoption be more widely accessible to more farmers and growers. Through its Industrial Strategy it aims to focus more on innovation adoption to increase productivity and boost farm incomes.

The creation of so-called “What Works” centres, organisations which almost literally kick the tyres of new innovations to assess their performance, has gained traction in other sectors. They are designed to help the public sector make better decisions based on evidence – one of which is the National Institute for Health and Care Excellence, which provides guidance, advice and even standards around the adoption of new pharmaceuticals and care practices by the NHS in the UK.

Of course, agriculture and horticulture are not public services, but the potential for such a centre to provide independent, evidence-based guidance on the latest new technologies and their efficacy would be a way to help inform and accelerate the adoption of new innovations by farmers. Happily, discussions are underway to consider the feasibility of such a centre for UK agriculture.

Future systems need to help the best farmers get even better, while the rest also improve. This will be a combination of a few farmers making big step changes which will eventually filter across the wider industry, as well as lots of farmers taking smaller incremental steps.

Mechanisms to disseminate best practice, an independent centre to help farmers triage the myriad of new innovations, and most importantly, encouraging the continued role of farmers as trusted sources of information about new ways of working. That’s the future of knowledge exchange in agriculture.