Gene boost in battle against black-grass

A new method[i], enabling the genetic alteration of Black-grass to understand how herbicide resistance develops, has been described as ‘game changing’ by the lead scientist, Dr Dana MacGregor of Rothamsted Research. 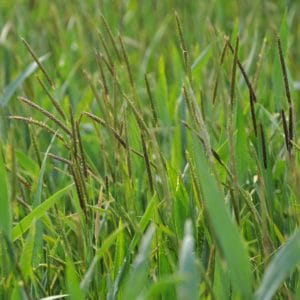 Black-grass is the bane of winter cereal growers in the UK. Emerging in autumn, as many cereals are being drilled, the weed competes with the crop, cutting yield by around a tonne per hectare, in many cases[ii]. Eradication of black-grass before it sets seed is essential in order to prevent rapid colonisation in future seasons, which can lead to much more substantial losses.

Whilst many weeds can be eradicated with herbicide application, this is no longer an option for many farmers in the UK when it comes to black-grass. The pest has developed resistance to most of the formulas available for use on cereal crops, with UK farmers now increasingly switching to spring cropping to avoid the pest. Recent estimates suggest that total loss of herbicidal control over black-grass could reduce annual wheat yields in the UK by 3.4 million tonnes at a cost of £1 billion[iii].

Dr Dana MacGregor, who leads a black-grass research group at Rothamsted, says “To be able to design and deploy weed management strategies that are both effective and sustainable, we must first understand what allows them to avoid the current control practices.”

In a first for science, Dr MacGregor’s team have managed to change gene expression in the plant via a plant-infecting virus. This approach, which was originally designed for use in crops, has allowed them to discover how genetic changes allow black-grass to become resistant to herbicides.

The technique first involves editing plant-infecting viruses so that they contain a gene of interest. The edited viruses are then used to infect the plant.

The viral infection can then lead to two different outcomes depending on the virus.

First outcome –  when plants normally fight viruses, plants actively remove any genetic material that has marks indicating it came from a virus. In fighting the virus that has been edited, the plant inadvertently reduces expression of the gene of interest at the same time. This prevents the plant proteins from being made.

Second outcome – while the virus is making copies of itself it uses the plant to create its own viral proteins. When the edited virus infects the plant, the gene of interest is also made into a protein and it can give the plant new or enhanced capabilities.

The team at Rothamsted used the first approach restore herbicide susceptibility to a resistant black-grass strain. Previous studies had hypothesised the gene was involved in metabolic resistance[iv], but the new technique provides direct proof. Inserting the resistance gene into the virus causes the plant to shut down all copies of the gene including its own – and thereby switch off its resistance to the herbicide. The team used two genes widely used in biology in the second approach to make black-grass fluoresce under UV light with the insertion of a gene from jellyfish or to survive lethal doses of a herbicide using another bacterial gene that renders the herbicide inactive.

Dr MacGregor says the research is a ‘game-changer’ for weed genetics. This approach is not designed to be used as a herbicide itself, but it could lead to the design of better herbicides in future. “These virus-mediated techniques allow us to bring black-grass into the lab and ask questions about how specific genes works like we have never been able to before.”

Rothamsted Research is a global leader in crop protection research, and one of the oldest agricultural institutes in the world. This work was supported by the Smart Crop Protection Industrial Strategy Challenge Fund and the Biotechnology and Biological Sciences Research Council, part of UKRI.