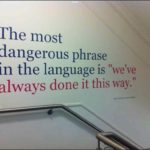 How do farmers and growers hear about new innovations in agriculture? And who is most trusted to bring news about the “Next Big Thing” that will boost yields, automate an existing tedious process, or make the farm more efficient, productive, profitable or sustainable? More importantly, once farmers have heard about (and like the sound of) a new innovation, what barriers to adoption exist?

These questions formed the basis of discussions at the Technology Translation Workshop at the Innovation for Agriculture East event, held at Trinity Park by kind permission of the Suffolk Agricultural Association and in association with FramFarmers.

Scene-setting with an overview of new innovations from the Antipodes and Denmark by 2014 Nuffield Scholar Mark Bowyer resulted in most delegates confessing to seeing ideas that were new to them. So there is much still to share and learn.

It appears there is no shortage of communication channels to farmers about new technologies. Agricultural Associations (not surprisingly, bearing in mind the location of the workshop!), events and conferences, along with newsletters from membership organisations were all mentioned. The media is also an important source of information, both the trade and news press and, surprisingly, social (Twitter, Facebook etc).

Overwhelmingly in the lead, however, was the role of personal communication. The shooting field was highlighted as a key networking opportunity for knowledge exchange by farmers, along with discussions with neighbours and vets (including those that have recently travelled and seen new innovations internationally).

But three channels emerged as being both trusted and highly sought for new innovation information.

1. The passionate and entrepreneurial, successful and innovative grower who acts as a champion and ambassador for a new product or method.

2. Grower groups, ideally around a demonstration trial, so that people can see the effect for themselves.

The key to all of these was the perception of independence, as least “not-for-profit.” This concept of “independence” is an interesting one.

Some delegates argued that having a product to sell alongside the advice might sometimes compromise neutrality. Yet as others pointed out, investment in new chemicals or varieties is long term, risky and expensive, meaning there is a crucial role for the commercial players in this space to develop and disseminate their latest innovation.

Therefore there is a considerable requirement for an independent authority to assess the new ideas. Part of this is currently carried outby the levy boards, but here there were mixed views. While some delegates felt that they were a highly trusted and important source of information about new research, others felt they didn’t even register on their list of channels for communication.

Similarly the role of the local research institute or University was mentioned – but only in passing. Trusted due to the independence maybe, but not the first port-of-call for new innovations – something we should look to change? “Regional” was also a phrase often heard, “will it work in my area, or is it only good in other locations?” – a local context for information is also important.

Finally you are convinced. You’re impressed by the field trials you’ve seen, your most trusted friends have never looked back since they started it, and it’s all over the pages of the trade press as the Must Do for next season. But what are the barriers that might exist to actually committing to adopting a new product, service or approach? High capital costs and the risk associated with a lack of return on investment can make some new innovations difficult to access. Integrating them into existing systems on the farm may not be as easy as you’d hope, and it’s going to take a lot of time to oversee its adoption. Yet as some delegates pointed out, can you afford not to invest the time in looking at new ways to make your business more profitable and productive?

Access to grant money has become an expectation, and the mindset (“am I a farmer and spend all my time farming, or do I run a farming business?”) was highlighted as a potential barrier, as well as a tendency to “do it how we’ve always done it.” Of course, delegates rightly highlighted some of the major institutional and structural barriers to the smooth and seamless transition of technologies from the lab or workshop to the field or glasshouse. There were also some concerns about the regulatory and assurance attitude to change. Fragmentation of the innovation ecosystem, the apparent disconnect between fundamental and applied research, and the fact that innovators are not always the best communicators were all highlighted as barriers.

The whole UK “knowledge transfer” space is also a busy one – often with competition between those facilitators who are trying to help. Commercial interests among those developing new innovations also emerged again as an issue –either by “buying and killing” a competitive emerging technology, or the need to retain competitive advantage by ensuring lack of connectivity and inter-operability with other systems that might already be in place on the farm.

What should the future hold?

The key question remained as to how to improve things. The important role of independent, not-for-profit players communicating to the industry about new innovations was again re-emphasised. Better signposting, and alignment of all the players along the value chain, from fundamental research through to those adopting and using the technology. The importance of farmer/grower feedback into the innovation process also emerged as a theme, along with the need to communicate clearly as an industry back to funders and politicians that some of these challenges need a 25 year commitment, looking beyond many successive governments.

Co-operations with other industries will also help, in agriculture it was noted that sometimes there is tendency to try and re-invent something already available in a different industry. It is clear from the workshop that farmers need no convincing of the role of new innovations on the farm. Yet the journey of technology translation and knowledge exchange can be complex. But the role of the innovative, passionate (yes, the word was used a lot!) farmer who acts as an honest broker to share new ideas remains one of the most trusted knowledge transfer professionals for agricultural innovation. So where next? How can these people be encouraged and helped for the benefit of the whole industry? The subject of another workshop, perhaps…..?