Farming businesses that participate in research have ‘first footer’ advantage when it comes to the adoption of new techniques and tools, but it also requires an investment of time and resources and this can be difficult to balance with the demands of the day job.

However we have seen the far-reaching benefits first-hand.

It was interesting to hear feedback at the REAP Farmers Breakfast last year, when Defra ran the second of two workshops looking at how farmers can be encouraged and supported to engage with research programmes.  The response was positive but the need for professional project management of the projects was stressed and also the need to researchers and technologists to have some common domain knowledge.

Encouragingly we have seen that a number of the recent funding calls reflect feedback from farmers.

To support the call for more domain knowledge we ran a sell-out Agriculture 101 event a few weeks ago to offer insights into the industry for newcomers.

There are many ways to implement farmer-led research and one example is a field lab.

It was at the Innovation Hub at the Royal Norfolk Show that the idea for a farmers’ trial of liquid digestate came about.  Six farms were involved in the Innovative Farmers Field Lab and the project had some specific objectives around determining nitrate levels and application times.  But interestingly, when the farmers came to present at a recent Pollinator and hear the findings of the research the numbers were not their key concern. 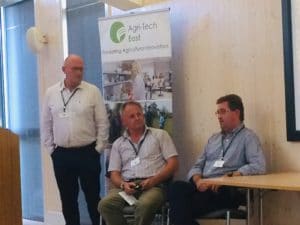 They talked about the Breckland soil being like ‘sand through their fingers’ and the need to do something to improve the organic content to ‘ensure there was soil for future generations’.  The trial had become much more than just an academic exercise to reduce the cost of inputs.

“It is a fantastic journey we are on,”  commented Andrew Blenkiron.  “The real numbers only time will tell, but we are making an effort to do something better and we will make it work.”

Stephen Temple commented “As farmers we need to be seen to do the right thing for emissions and the planet.”

James Beamish, Farming Director of Holkham Estate,  explained his longterm aim was to reduce dependence on artificial fertiliser and move to all organic amendments. The farm grazes sheep on the cover crop over the winter returning manure to the ground. Nick Sheppard from Upton Suffolk Farms said his soil was becoming ‘blowing sand’ and his aim was to build for the future.

The benefits of applying the digestate also went beyond the measurables of the study.  The discussion with other farmers in the room quickly went on to water retention and wider management of pests and weeds, the role of cover crops within a rotation.

The farmers were also more interested in observed differences, one had taken aerial images to look at the colour of the cash crop across the trial site. The number of earthworms and the texture of the soil were more tangible outcomes than the numbers. 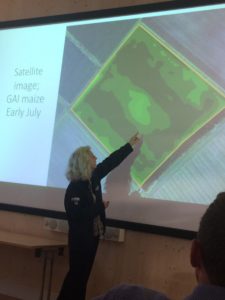 field trial on a working farm.

Unpredictable weather, time pressures, unfamiliarity with data collection techniques, inconsistencies between the protocol on different farms, intrinsic differences between and within the trial strips have meant that new thinking is required to determine if the findings are significant in scientific terms.

Putting field data into a wider context makes it more meaningful and adds value.  Comparing the results between the six farms, created a discussion around the reasons for the differences, for example, did the timing of application make the difference or was it the heavy rain at the start of the season?

The multi-factors involved lends itself to data modelling and analysis.  This is becoming more accessible as farm management software provides a nationally standardised system for recording crop input application, field and yield maps and animal movements and medication.

We are seeing more systems emerging that can help make sense of diverse data inputs and use them for prediction or for modelling different scenarios. With these developments farm-based research will become more meaningful.

As the importance of generating valuable intellectual property has increased in recent decades, it is critical for researchers to be able to evidence the date and conditions under which a new discovery was made. In the laboratory, recording of experimental design, conditions, results and conclusions requires meticulous detail, with the aim that other scientists can replicate the experiment if necessary.  It proves when and how the concept was originally created and the results generated, which is important to show who had the original idea.

No-one is suggesting that on-farm research requires this level of detail and potential scrutiny, but perhaps now is the time to create a standardised system of recording research conditions and results.

Creating a comparable and simple way for recording experimental approaches and results from on farm trials will help ensure value capture, reduce duplication and help to  reveal new insights and long-term trends.

(And while we’re talking R&D, don’t forget to talk to your accountant about claiming R&D tax credits….farming is the most under-utilised industry for claiming this really important benefit!)