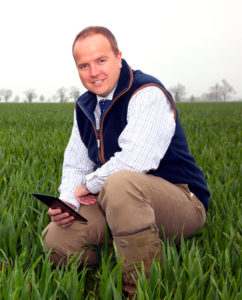 The company’s new precision agronomy service combines multiple factors such as soil type, weed burden, seed bed conditions and even potential yield which are represented by maps and over-laid to build variable rate application plans. This means that farmers can develop tailored seed rates for different parts of the field that are appropriate to the conditions at the time, thereby linking precision farming with agronomy.

“One of our customers, based in Essex, used Omnia Precision for his autumn drilling to help him calculate the most appropriate seed rates taking into account his heavy clay soils and blackgrass burden, and he will also be using the software for his spring drilling on a similar basis,” says Oliver. 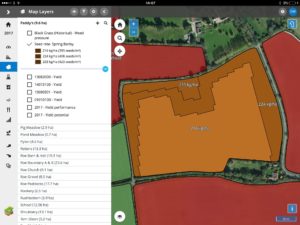 Omnia uses Multi-Dimensional Analysis, which allows the user to overlay different mapping layers such as soil type, weed pressure and seedbed conditions, which is critical for enhanced decision-making, Oliver argues.

“Most precision systems only work with a single layer of data, but we have developed a system that brings in multiple factors such as soil type, seedbed and weather conditions.

“For a seedbed conditions map, you would define the seedbed as ‘poor’ or ‘very good’, and define your weed pressure as being ‘high’ or ‘low’. The system brings these different layers together, merging them to create a pattern.

“If a seedbed is defined as ‘poor’, the system uses algorithms to suggest the best course of action. We have a model for the majority of combinable crops, such as wheat, barley, peas and beans, helping you to make a decision about seed rate.”

The models were produced as a result of years of trials. The software additionally gives the user the ability to change the solutions suggested, to reflect their personal attitude to risk. “We have specifically designed Omnia to be easy to use,” comments Oliver. “You don’t need to have advanced IT skills to be able to pick it up.”

Omnia was shown for the first time at Cereals 2016.  As well as being suitable for arable, Omnia also has nutrition models for a wide range of fruit crops, with Hutchinsons advising on a large proportion of the UK fruit sector.

Oliver is set to speak about Omnia at “Smarter, Not Harder: Open Innovation for Smart Farming” at Elveden Farms on May 10.

The smart farming event is being run by Agri-Tech East and Smart-AKIS for an audience of farmers, growers, technology developers and researchers.

Find out more about Omnia at www.omniaprecision.co.uk