Lack of scientific evidence at the heart of EU legislation was one of the concerns raised at the Norfolk Farming Conference (NFC), which filled the mighty John Innes Centre lecture theatre, last week.

A rousing opening speech by DEFRA Secretary of State Liz Truss included a much-reported reference to the Norwich Research Park being “a powerhouse of British food and farming” and, more widely “[the] constellation of star research” across the east of England.

But just as importantly, she emphasised that regulation must be made on the best scientific evidence, stressing that the UK should be able to use its own scientific discoveries, including protecting the UK from plant and livestock diseases.

This message was reiterated by Andrew Clark, NFU’s Director of Policy, bemoaning the fact that science-based arguments don’t appear to be accepted in decision-making at EU level – citing the removal of the EU’s Chief Scientific Officer revealing the low priority given to science at the heart of policy-making and regulation.

Good science was at the heart of another conference this month, with the Winter Conference of the British Beet Research Organisation – a great chance to share highlights and findings from BBRO’s research and technology transfer activities with growers, as well as reflecting on last year’s sugar beet crop.

With a budget of around £2M/yr, as a “hybrid research organisation” the BBRO supports projects on yield progression (varieties, nutrient uptake, root architecture etc), yield stability (management of pests and diseases) and harvest storage (soil tare and storage management). Its funding coffers have also been further boosted by two recent successful bids to Innovate UK.

Key questions often asked of BBRO were tackled by Dr Debbie Sparkes from Nottingham University, with the science supporting her answers.

In essence, there’s no need to apply more nitrogen than needed in high yielding varieties, it will rob the growing roots of vital biomass, but the plants need easy access to nitrogen early in the growing season Late harvested crops also don’t benefit from adding more nitrogen; it doesn’t increase leaf canopy development.

Delegates also heard that the UK only ranks 5th in Europe in terms of sugar yield, (behind the Netherlands, Spain, Belgium and France) due to average daily temperatures and irradiance – both lower in the UK during those critical canopy-building weeks.

Bearing in mind that the crop may have to stay longer in the ground, another question is whether there are any varieties that are better suited to late lifting. After a detailed scientific analysis, there is no evidence in the ranked performance of different varieties if the harvest date is delayed. 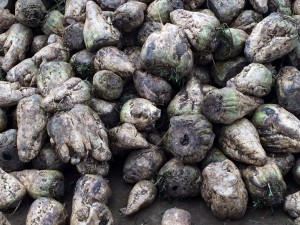 Should you grow a cover crop before sugar beet?

Some evidence of the benefits of cover crops were included in research presented by Prof Andrew Lovett of the University of East Anglia, and James Beamish of Salle Farms, who discussed  their Demonstration Test Catchment project, one of only 3 in the UK, where the east of England was specifically chosen for its different soil types. Using automated monitoring facilities, water quality indicators were measured every 30 minutes and sent wirelessly to a website. The results were dramatic, revealing that individual rainfall events can be very significant at washing nitrogen and phosphate into the water course – up to 9 kg of N / ha and 35 kg of P / ha.

Additionally, planting a cover crop in the form of oilseed radish substantially reduced leaching of these nutrients into the water course. Reflecting on the 2014 sugar beet crop, BBRO’s Lead Scientist Mark Stevens shared data on weather, varieties and sowing conditions which all helped to contribute to the high yields – as much as 163 tonnes / ha in trials.

A mild Spring, obliging rainfall patterns and rapid crop growth and yield progression, coupled with timely pest control helped to make 2014 a great year for sugar beet – although rust has now taken the dubious honour as the major disease issue for sugar beet in UK conditions, so there’s no room for complacency.

Innovative farmers are getting more vocal

Communication was another theme  this month – with current Nuffield Scholar Jake Freestone and Green Shoots Director Susie Emmett at the NFC encouraging more and wider communication about the industry and its achievements.  There has been a noticeable increase in the use of social media with “farmer-based” Twitter traffic actually averages out at 161 tweets per farmer per year!

The often-quoted statement that “the average age of UK farmers is 59” under plays a growing spirit of innovation, and the presence of younger farmers and growers was really noticeable at both the NFC and the BBRO event– and those aged under 30 drew a round of applause during Susie Emmett’s talk.

The panel of young farmers at the end of the NFC summed it up with 3 quotes each – when asked to give advice to their older counterparts:

1. The most dangerous phrase is “we’ve always done it this way”

2. It’s difficult to plan for volatility, so don’t beat yourself up about it

Strong words, but ones which show a shifting mindset – one of change, open-mindedness, a willingness to take on new ideas and a desire to move the industry forward. Exciting times indeed.