It may be possible to protect the performance of crops such as wheat against heat stress caused by rising temperatures. Researchers, including the University of Essex, have found a way of  bypassing one of the enzymes used to control photosynthesis; the natural process plants use to convert sunlight into energy and food.

The work focussed on the enyme Rubisco which has a key role in photosynthesis, it turns carbon dioxide into sugars.

Dr Amanda Cavanagh, from Essex’s School of Life Sciences, who led the research said that global temperatures are rising at a rate that is outpacing a plants’ ability to adapt. 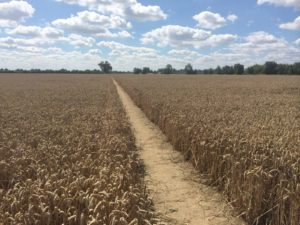 She says: “We know that as temperatures rise, Rubisco has a harder time distinguishing between carbon dioxide and oxygen, and so rates of photorespiration rise. Because of this, we thought manipulating photorespiration might be a way to help crops take the heat and mitigate yield losses caused by higher temperatures.”

The research project, published in the Plant Biotechnology Journal, showed that the engineered plants produced 26% more yield than the wild-type plants exposed to the same heated conditions. The engineered plants also had 15% less yield loss under the higher temperatures than non-engineered plants. This gave the researchers insight into how to improve the yields of food crops in the changing climate.

Photosynthesis relies on the enzyme Rubisco to turn carbon dioxide into sugars. However, photosynthesis produces an oxygen-rich atmosphere and about 20% of the time, Rubisco grabs oxygen instead of carbon dioxide, resulting in a process called photorespiration which can reduce yield of a grain like wheat by about 36%.

This lost production is equal to 148 trillion calories in wheat and soybean, calories that could be feeding millions of people.

From an economic standpoint, the yield loss, reportedly as high as 40-50% in the southern United States, cost producers around $500 million in 2012. Producers in regions around the equator can see even more losses, due to the increased temperature, with the issue expected to escalate worldwide due to climate change.

This research is part of Realizing Increased Photosynthetic Efficiency (RIPE). Now the concept has been proven in tobacco plants, research is underway to take the same genetics and put it into food crops like potatoes and soybeans, allowing food production to increase, despite the ever-increasing temperatures around the world.