Expectations have never been higher about the promise and return for agricultural technologies. Enlightened interpretation of “big data,” routine deployment of robotics and automation, connected devices and farm machinery via the “Internet of Things”, and distributed ledger technology to build trust across the agri-food supply chain.

All are indeed poised to potentially transform and disrupt the industry.

Yet amidst all this anticipation, it is worth reflecting on the need to manage carefully the expectations of farmers, investors, politicians and the media about the speed, scale and cost of widespread implementation of disruptive innovations.

The so-called “hype curve” was developed in the USA and, while it has been somewhat controversial in its use and interpretation, it aims to illustrate the phases of maturation of emerging technologies 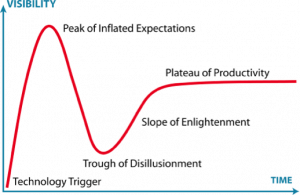 Since the publication of the UK’s agri-tech strategy in 2013, Government has clearly demonstrated its strong commitment to agri-tech.

The strategy was launched with £160m of funding to create the four Centres of Agricultural Innovation, and launch the agri-tech Catalyst fund for collaborative R&D.

More recently the Industrial Strategy Challenge Fund has seen the announcement of £90M of investment towards “transforming food production; the first call has a strong technology flavour.

Yet this money comes with high expectations from Government, not unreasonably, that its investment will result in increased productivity, wider adoption of technologies on-farm and a reduction of inputs. Which in turn will lead to more, higher skilled jobs, increased exports, and a greater contribution to the UK economy from agriculture and horticulture.

But the clock is ticking….

The short-term nature of election cycles mean that the pressure is on to deliver. The four-year Industrial Strategy covers all sectors, so agri-food is seen as just one of a number of industries which need to demonstrate a return on the Government’s investment.

Similarly, investors are keen to see new agricultural technologies rapidly gaining traction in the market, increasing the valuation of the company, and hence their potential returns when the company is sold or floated. Even the media risks becoming bored of what they perceive as too many “me-too” solutions and are keen to uncover the Next Big Thing.

Whether you think the hype curve mirrors real life, the risks and the issues facing agri-tech are very real. Decisions – around public policy, private investments and market analysis are all eagerly anticipating the launch of a raft of new technologies and solutions.

To launch a new tech-based product or service onto the market before it is truly robust, reliable and ready risks undermining the market and leads to disillusionment and rejection.

Worse, we risk seeing policy decisions made based on the anticipation and expectation of widespread commercial adoption of a new way of farming – such as automation with robotics – within the very short-term.

It is vital that those making decisions based on the expectation of the performance of new technologies do so with their eyes open and their minds informed. A realistic sense of cost, timescale and the potential hurdles to be knocked down in order to see widespread commercial reality is crucial.

As welcome and vital as financing is for new innovations, sometimes just throwing money at the problem and expecting rapid results won’t work.

Here, there is a crucial role for government to support this investment with the right levers and incentives…..and patience.