It was considered almost impossible, but now a consortium of scientists has sequenced the huge wheat genome.  The enormous dataset will accelerate innovation in breeding resilient and disease resistant crops by defining the precise location of 107,891 genes. 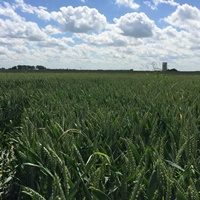 The wheat genome is 5 times larger than that of the human and more complex. It has three sub-genomes and a large part of it is composed of repetitive elements. This means that vast parts of the genome are very similar, if not identical, to each other. This has made it difficult, until now, to distinguish each sub-genome and to put together the genome into its correct order.

Wheat is the most widely-cultivated crop on Earth. It provides more protein than meat in the human diet, and contributes about a fifth of calories consumed by humans. It also has a large and complex genome with 16 billion base pairs – the building blocks of DNA.

But wheat is susceptible to drought and flood, and swathes of the crop are damaged each year by diseases such as wheat rust. The sequencing of its genome paves the way for much faster production of wheat varieties adapted to climate challenges, with higher yields, enhanced nutritional quality and improved sustainability.

Professor Cristobal Uauy, Project Leader in crop genetics at the John Innes Centre says: “Genomic knowledge of other crops has driven progress in selecting and breeding important traits. Tackling the colossal wheat genome has been a Herculean challenge, but completing this work means we can identify genes controlling traits of interest more rapidly. This will facilitate and make more effective the breeding for traits like drought or disease resistance. Where previously we had a broad view and could spot areas of interest, we can now zoom into the detail on the map.”

A paper published in Science by the International Wheat Genome Sequencing Consortium is authored by more than 200 scientists from 73 research institutions in 20 countries including the John Innes Centre, Rothamsted Research and the Sainsbury Laboratory. It details the sequence of the 21 chromosomes,more than 4 million molecular markers, as well as sequence information between the genes containing the regulatory elements influencing the expression of genes