Agri-tech deal flow – its all in the timing

The planning of our next agri-tech hackathon has got us thinking about the agri-tech deal flow and the  importance of vibrant, patient and confident venture / investment communities. So we’ve been both inspired and challenged by findings of the recent recent Agfunder AgriFoodTech Investing report which reveals global reveals global highlights and trends in the industry. 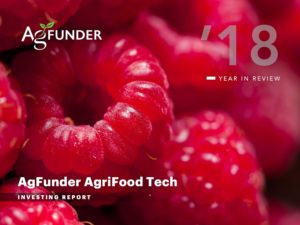 Globally, a massive $16.9bn was invested by 1776 unique investors across 1450 deals last year. This is compared with $5.4bn in 2014. There was a 21 % increase in “seed” investment (ie very early stage companies), and more later stage deals were done, reflecting the ongoing evolution and maturation of businesses.

Importantly for investor confidence, the biggest ever “exit” in agri-food tech took place last year, when Merck acquired digital animal tech company Antelliq for $2.4bn. Increasing commitment in automation, digital agriculture and widening of scope to include fish as well as livestock has helped build value in the company (although it’s been a very slow burn – the company can trace its history back to 1955).

Investment in farm-based robotics, mechanisation and equipment saw 83 start-ups collectively attract 56 % more finance than in 2017; and the appetite grows to do things differently via so-called “novel farming systems” (vertical farming, insect production) attracted 54 deals, 2 of which were worth over $100m.

So what’s the problem?

Against this backdrop of global success, 2018 saw no UK-based farm-tech mergers or acquisitions in the top 20 deals in 2018; there was just one UK exit – insect control company Oxitec – which was sold for $160m.

We don’t believe it is lack of investors, lack of access to finance, nor even access to quality deal flow. The AgFunder report points to the benefits of accelerator programmes such as Y Combinator and Radicle in the USA and SproutX in Australia and, admittedly, we have fewer of those in the UK. But we don’t even think that’s the big issue either.

We think it’s more a matter of timing

From a big flurry of deal flow until 2016, we subsequently saw a slight dip in investment-ready propositions. Neither business coaching, nor leadership training, nor access to world-class accommodation could have accelerated the pace – even accessing finance was probably not the limiting step.

Most likely, it was simply the technologies just weren’t ready and needed more time before going to investors.

Lots of trials have been in progress, much (expensive, quality, quiet) development work has been undertaken, and many value propositions are now refined and robust.

So yes, it’s been a quiet(er) time from the UK in terms of agri-tech investment. But we are confident we’re seeing an end to that slight hiatus, with some of the most exciting start-ups we have seen for a while entering the investment arena.

See them at REAP

Some of them will be speaking at the Start-Up Showcase at our 2019 REAP conference in November. And hopefully we’ll be helping fill the agri-tech pipeline with ideas generated from our second hackathon we’re hosting in July.

In terms of the larger companies (too old to be called start-ups) they are also working hard to build value, generate revenues – either to attract later stage investment or consider their plans for exit.

As someone once said – “you can’t jump from little things to big things. It takes time and patience.”