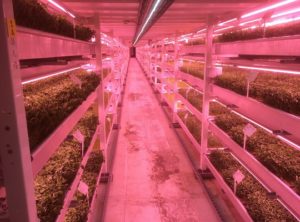 Sitting thirty-three meters underneath the busy streets of Clapham, a disused air raid shelter from the Second World War is currently producing sustainable and fresh produce, thanks to a new initiative called Growing Underground. These forgotten tunnels provide a pest-free, climate-controlled environment that is close to point of need. This and other innovative new approaches will be discussed at the upcoming Agri-Tech East Pollinator meeting “Undercover Agents – New Technologies for Controlled Environment Production” at the Sainsbury Laboratory on 22nd March 2016.

G’s Fresh has recently invested in “Growing Underground”, an urban farm that employs hydroponic systems and LED lighting, using 70 per cent less water than traditional open-field crops. This underground approach is attractive due mainly in part to its scalability. Daniel Cross, Managing Director of G’s Fresh Salads, explains: “Disused buildings above ground in London are too expensive or require too much capital to be commercially viable. Comparatively, tunnels are attractive due to their lower cost per square meter and their closeness to market and population.”

As the tunnels are in darkness, LED lighting is used to emulate natural lights. LED lights have recently become attractive for growers seeking a reduction in cost, according to Simon Pearson, Director at the Lincoln Institute of Agri Food Technology and a second speaker at the Pollinator event.

Pearson explains: “LEDs are more efficient than normal lamps and offer the advantage of being optimised to produce specific wavelengths. In addition, wavelengths can be altered during the day to give optimum day length, and a large amount of light can be created instantly.”

Pearson comments that new advances in semi-conductor technology and solid-state devices have led to an increase in use of LEDs for horticultural applications. “The falling costs of LEDs and greater uptake from industry means we are approaching the tipping point where alternative approaches to cultivation may be possible.”

Joining Cross and Pearson is Jason Hawkins-Row (left), CEO of Aponic Ltd, a start-up company that has developed a vertical, soilless growing system, which reduces water use by 90 per cent and is not dependent on fossil fuel for production or transportation. Hawkins-Row believes that city farms could be the future of covered crops, and that every individual can be empowered to supplement their food demand and remove strain from the food supply chain. He states: “By getting towns to produce low water, low energy food that improves health and lifestyle, we can reduce stress on the food production and the water table.” Read more about Aponic here.

Dr Belinda Clarke, Director of Agri-Tech East, believes that bringing together those who are developing technologies to increase the productivity and efficiencies of undercover crops is beneficial. “Growing undercover has enabled an extension of the growing season and an increase in the quality of many high value crops, but there is still a need to make the most of this controlled environment.”

Dr Clarke is also excited about the location of this Pollinator. “Attendees of this event will be given the chance for an insider’s guide to the Sainsbury Laboratory Greenhouses, with state-of-the-art glasshouses that are among the finest in the world.”

Additional speakers at the event are Ian Collison, from Collison Cut Flowers, and Julian Franklin, Head of Horticultural and Controlled Environment at Rothamsted Research.

Book your ticket for “Undercover Agents – New Technologies for Controlled Environment Production” from our events page, which also includes a video about the automation process utilsed by Collison Cut Flowers.