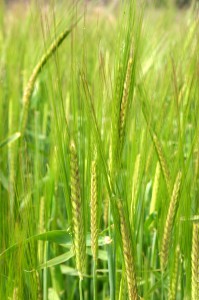 Samples taken 160 years ago  are offering new insights into the modern problem of fungicide resistance.

Just as antibiotic resistance by disease-causing bacteria poses a huge challenge to human and veterinary medicine, resistance of crop pests to chemicals is a major issue for food security and farm incomes.

The Hoosfield experiment at Rothamsted Research was started in 1852, and has seen cultivation of continuous spring barley ever since. Originally designed to test the effects of different inorganic fertilisers (N, P, K, Magnesium and sodium silicate), and farmyard manure, the experiment provides a globally unique opportunity to monitor the rise and fall of different bacteria and fungi that cause crop disease.

Researchers are investigating shifts in sensitivity to azoles, an important class of fungicides, analysed samples of infected barley leaves that were collected in the 19th Century.

These showed that an ancient gene CYP51A, found in the leaf blotch fungus, had almost been lost from the fungal gene pool but re-emerged in the late 20th century as the gene helps the pathogen to cope with azole fungicides treatments.

This research provides important insights into the way that, just as in humans and animals, disease-causing microbes respond to the world around them. It also offers researchers a more detailed understanding of the evolution of resistance, which will help with the development of practical solutions.

Dr Bart Fraaije, lead scientist at Rothamsted Research, commented that he had to admire the foresight of the Rothamsted founders in keeping the samples “this means we can analyse samples from the 19th Century with 21st Century DNA sequencing technology” he says.