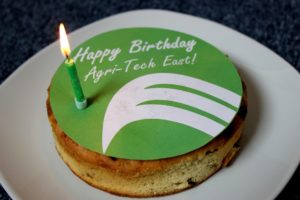 It hardly seems possible that a whole year has passed since Agri-Tech East was launched at Cereals 2014. It’s been an inspiration to work with so many forward thinking growers and farmers, world-leading scientists keen to see practical applications for their research, and creative technology developers bringing new ideas and innovations to the agri-tech agenda.

As we celebrate our first birthday, we’re so proud to have welcomed such a wide range of members to be part of the Agri-Tech ecosystem from small micro-businesses to large grower groups, research technology organisations and scientific institutes – and the numbers are growing weekly.

Bringing together all parties

Our Pollinators have attracted a range of high quality delegates from academia, farming and technology industries (such as agronomy), and we were pleased to gain BASIS accreditation at the end of 2014. A big thank you to the Pollinator sponsors so far – Anglia Farmers, Mills and Reeve, Hutchinsons, Hertfordshire Local Enterprise Partnership and S-Tech Insurance.

A highlight of the last year was definitely Agri-Tech Week 2014, which we ran in partnership with the Royal Norfolk Agricultural Association and the Suffolk Agricultural Association. With over 1000 researchers, farmers and technologists taking part in person, and over 60,000 engaging via social media, it set the scene for this to become an annual event in the UK’s agri-tech calendar.

A sell out event

The first of our annual conferences “REAP – Realising our Economic and Agricultural Potential”, was held in the middle of Agri-Tech Week 2014 and sold out within 6 weeks of opening registration – a lesson for this year where we’re moving to a bigger venue! We’re really excited about the speaker line-up for 2015, with some of the region’s leading producers and innovators taking to the stage, plus the Start-Up Showcase for agri-entrepreneurs, and a keynote address by the President of the National Farmers’ Union.

Following a successful pilot last year, it’s also a pleasure to announce two branches of our Young Innovators’ Forum (YIF) – designed to bring together early stage careers scientists and farmers to help forge new links, build trust and understanding and hopefully lead to some new collaborations. Thank you to the dynamic individuals at the Norfolk Young Farmers’ Club and the John Innes Centre for leading the Norfolk YIF, and from Spearhead International and the CambPlants Hub (hosted at the Dept of Plant Sciences at the University of Cambridge) for leading the Cambridgeshire YIF.

A year on, we are preparing to host the first ever “Innovation Zone” at the Royal Norfolk Show (stand #337) to showcase examples of agri-tech innovation from the region. We’re also finalising the plans for Agri-Tech Week 2015 prior to launch later this month, and are starting to think about our Pollinator programme for 2016. We’re also seeing some case studies emerge from new collaborations and relationships we have brokered and look forward to talking more about those in future.

A big thank you also to everyone who has offered such support to Agri-Tech East, all those who come to our events, interact with us on Twitter and who give us such great feedback about our website.